Now that half the year has passed, a review of offshore project sanctioning might be timely. Activity has picked up in 2017, especially for larger projects with CAPEX allocations of at least $500m. The uptick in FIDs has coincided with improved E&P budget guidance from many IOCs. So oil price volatility notwithstanding, could this be an sign of generally improving prospects for larger offshore projects?

Large Projects On The Rise

Offshore field project sanctioning reached a peak of 120 FIDs in 2012. Since then, sanctioning activity has been under pressure from a range of factors, most notably the weaker energy price environment that has prevailed since 2H 2014. Indeed, oil company E&P spending cuts induced by the falling oil price in 2015 precipitated a 33% decline in FIDs that year. Larger projects (with an estimated CAPEX of at least $500m) have been hit the worse, with the number of such developments in 2016 to receive an FID down by 60% on 2012. In comparison, the number of smaller projects sanctioned in 2016 was down by a less severe 32% on 2012.

That being said, while it is true that sanctioning of larger projects seems to be on the rise, it is important to note that many such projects (including all those named above bar Liza Ph.1) were conceived pre-downturn and were on the verge of obtaining an FID in 2014. This implies that the recent uptick in large-project activity may not be sustainable, especially as the backlog of such projects continues to fall. Indeed, the history of start-up delays and cost over-runs at mega-projects such as Kashagan Ph.1 ($48bn) and Greater Gorgon Ph.1 ($55bn) had already prompted operators to rethink the viability of larger offshore projects even before the oil price downturn. Onshore US basins are also potentially problematic for offshore projects, insofar as they compete (quite effectively) for scarce investment dollars.

As a result of these considerations, operators have been downsizing many of the other large-scale projects planned prior to the fall in the oil price. Browse is set to use two FPSOs instead of three FLNGs, for example, while Bonga SW “Lite” now entails an FPSO with a processing capacity 33% smaller than before. Many operators are also placing more emphasis on subsea tiebacks to existing facilities, instead of major new offshore hubs (even if this means lower production volumes). Adapting to the potential “lower for longer” oil price outlook thus seems to be a priority for many upstream players.

So although FIDs at larger projects have picked up, looking beyond the backlog of projects from before the downturn, such developments seem to be less in favour. Scratching the surface, small projects are at least an offshore outlet for upstream investment and in the long run, perhaps cost savings cemented post-2014 might make large projects more competitive. 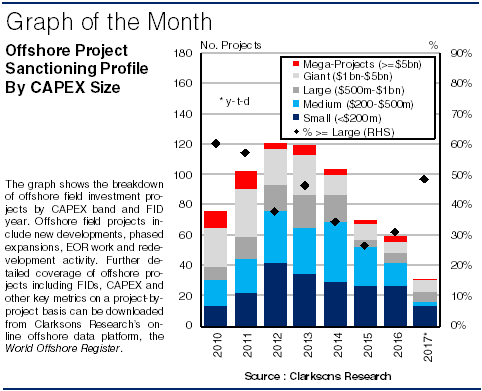