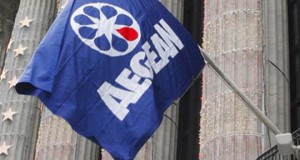 Aegean has reinvigorated its Board of Directors with the addition of three new independent directors, and today announced the appointment of Donald Moore to serve as Chairman of the Board.

The Board of Directors has also directed management to conduct a comprehensive strategic and operational review focused on maximizing profitability and return on capital. This includes an evaluation of the Company’s physical assets, existing footprint, and the capital efficiency of every business activity in which the Company is engaged and each port in which it operates.

Following the recent termination of the Company’s Consulting Agreement with Dimitris Melisanidis, the Company is planning to relocate its principal offices from the current location in a building owned and operated by Mr. Melisanidis. The Company expects the office relocation and related organizational changes to result in significant cost savings.

Separately, Aegean recorded stable operating results in the first quarter of 2018 as network volumes and gross spreads were largely consistent with the fourth quarter of 2017, reflecting competitive industry conditions and the continued decision to restrain volumes in ports and lines of business with lower margin profiles. Aegean’s business continues to generate positive cash flow and the management team remains focused on continuing to serve the Company’s strong global customer base.

Aegean continues to work through its annual reporting process, which includes a thorough review by the recently recomposed audit committee of the Board of Directors (the “Audit Committee”) and the Company’s recently appointed Chief Financial Officer. The Company and its advisors are working diligently to complete these reviews as soon as possible. The Company is pleased to have the continued support of its lenders and other stakeholders in connection with this process.

Aegean is committed to being a leader in the physical supply and marketing of marine fuel and is confident that its Board of Directors and management team are taking the right actions to position the Company for long-term success.

Aegean also announced that it has received an expected notice from the New York Stock Exchange (the “NYSE”) stating that the Company is not in compliance with the NYSE’s continued listing requirements under the timely filing criteria outlined in Section 802.01E of the NYSE Listed Company Manual due to the delay in filing the Company’s Annual Report on Form 20-F for the fiscal year ended December 31, 2017 (the “2017 Form 20-F”).

As previously disclosed, the Company was unable to file its 2017 Form 20-F without unreasonable effort or expense due to the need for additional time to complete the Company’s consolidated financial statements to be included therein, and the related assessment of internal controls over financial reporting. In connection with the Company’s internal review of its financial reporting, the Audit Committee is conducting a review of certain matters relevant to the preparation and completion of the Company’s annual financial statements. The Company will not be in a position to file its 2017 Form 20-F until after the Audit Committee completes its review. At this time, the Company cannot predict with certainty when the above-referenced review of the 2017 financial statements will be completed. The Company does not expect to make further comment regarding such review until its conclusion.