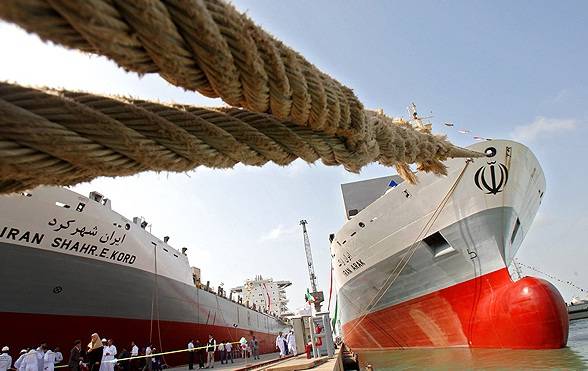 As Iran prepared to return to the global crude market, ship insurance, an obscure but vital part of the commodity trading world, was seen as an impediment to ramping up exports quickly. Those concerns appear to be easing with the help of a U.S. company.

Two oil tankers able to load a million barrels each of crude appeared to load Iranian cargoes this month and head for Constantza in Romania, according to data compiled by Bloomberg. Joe Hughes, chairman of the New York-based American Club, an insurer to the global shipping industry, said in an e-mailed statement Wednesday that the two vessels are “entered in the club at present”, meaning they are normally insured by his organization. The ships are among the first to go to Europe since sanctions eased last month.

Provision of insurance was seen as an initial sticking point for a revival of Iranian oil sales when wider sanctions against the Persian Gulf country were lifted last month. Andrew Bardot, Executive Officer of the International Group of P&I Clubs, of which the American Club is a member, said in January that remaining U.S. sanctions on Iran were a “significant hurdle” to insurers. The American Club said Feb. 9 it got government permission to cover shipments by “non-U.S. person members”.

“Any cover the owners have in respect of those vessels will be in accordance with the overarching terms and conditions of the insurance set out in the Club’s Rules,” including any relevant sanction compliance, Hughes said by e-mail on Wednesday.

Iran is trying to rebuild its oil output after the lifting of sanctions that intensified in 2012 to curb its nuclear program. The nation was expected to increase crude oil production by 100,000 barrels a day, or 3.7 percent, a month after sanctions were lifted and by 400,000 in six months, according to the median estimate of 12 analysts and economists surveyed by Bloomberg in mid-January.

The fact the two ships — the Distya Akula and the Eurohope — are normally insured by the American Club doesn’t necessarily mean they are covered by the organization for these specific shipments. Owners must normally comply with all applicable laws for their vessels to be covered.

There are other signs cover for the cargoes may become easier to obtain. Swiss Re, the global reinsurer, said on Tuesday that it’s “now open to sanctions-compliant Iranian re-insurance business with no U.S. nexus,” while carrying out enhanced due diligence on any potential business.
Source: Bloomberg