The Asian Long Range I clean tanker benchmark rate rose sharply Wednesday after three weeks of lackluster activity as tonnage was squeezed in the Persian Gulf, with several charterers coming in simultaneously to snap up tonnage, market participants said.

Two LR1 ships controlled by Dynacom were placed on subjects at w90 for 55,000 mt naphtha loadings on the key Persian Gulf to Japan route, they said.

The rates for fixtures done prior to the spurt were around w80. Last week ships were chartered around w70. 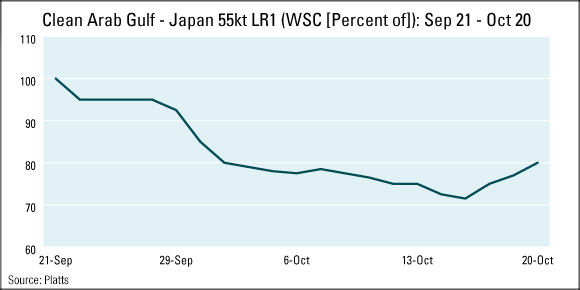 â€œOwners are holding out for more and the argument is not on the direction of the rates but only on the pace of increase,â€ said a Singapore-based source with an owner of clean tankers.

When the rates slipped to around w70 last week, there was a spurt in activity as charterers tried to capitalize on the decline. This has helped clear some of the excess tonnage, said a clean tanker owner in the Middle East.

â€œOwners are now aiming for w100 level,â€ said a tanker broker in Singapore.

However, not all ships are being hired out at high levels. â€œLR1s that have moved gasoline cargoes in their previous voyage were overnight offered around w82.5,â€ said one source tracking the latest deals.

Market participants also pointed to the relatively lower rates for moving cargoes to Europe while contending it is the naphtha runs to the East that are expensive. Total has placed a ship on subjects for loading next month at $1.55 million, which is little changed from levels seen before the spurt in rates.

The rates for LR2s that typically move 75,000-90,000 mt cargoes are holding steady and even under downward pressure. Gasoil is still being moved within the Persian Gulf in cross runs at around $250,000. Activity for long hauls is limited, market participants said.

Some charterers such as Unipec are toying with the idea of topping up a 55,000 mt cargo and moving on an LR2. â€œThey are trying both sides to get an optimal rate,â€ said the Singapore-based source with a clean tanker owner.

The tonnage list is getting longer and there are 29 LR2s available for loading in the Persian Gulf in the next four weeks, up from 19 a week earlier, a derivatives broker tracking the clean tankers market said.

[…] There you will find 29161 more Infos: shippingherald.com/asian-benchmark-lr1-rate-spikes/ […]