Demand: The growing imports of loaded containers into the US East Coast (USEC) continues to be a focal point for the container shipping industry. Growing by 10.4% in Q1-2018, the first three months saw 215,000 TEU more entering the USEC than in Q1-2017. Exports grew by 55,000 TEU in the same time span, growing outbound loaded containers by 3.8%.

This illustrates the constantly changing imbalance in US foreign trade. For every five containers entering the USEC in 2013, four were exported. In 2018, six containers are entering for every four leaving. The USEC trade lanes becomes more imbalanced by the day. This pattern is also seen on the US West Coast (USWC) trade lanes. For every ten containers entering the USWC in 2013, six were exported. In 2018, ten containers are entering for every five leaving. A clear sign of imports growing stronger than exports. Despite the positive demand growth, freight rates have lost traction. The broad-based China Containerized Freight Index (CCFI) which covers ten major Chinese ports and includes not only spot rates, but also long-term contracts are down by 5% on average for China-USEC trades and down by 7% on average for China-USWC for the first 18 weeks of 2018. If singled out, the decline in spot rates alone is much deeper, as the USEC is down by 18% and USWC dropped 22% for the first 18 weeks of 2018 as compared to the same time last year.

Similar worrying signs are seen in the Far East to Europe trade. CCFI is down by 3% on average as compared to last year, whereas the spot rates (SCFI) have slid 15%. The latter was quoted at USD 584 per TEU for the week ending 20 April but rebounded to USD 825 per TEU at the end of May.

It’s not just freight rates that are low, growth in shipped volumes are also weak. During Q1-2018 transportation grew a meagre 1%. Only, 36,572 TEU more was dispatched compared to last year. If we assume a roundtrip on the Far East to Europe trade takes 10 weeks, that kind of growth requires only two additional 15,000 TEU containerships at a utilisation rate of 95%.

Of lesser importance, but still significant, backhaul trades in Q1-2018 from Europe and North America into the Far East are suffering a lot, falling by 8% and 5% respectively. Partly due to very strong growth on those trade in Q1-2017. Over a two-year period, Q1 backhaul volumes are up by 6.4% for Europe and 7% for North America. (Source: CTS)

In general, backhaul volumes into China are negatively affected by the import ban of waste products that came into force on 1 January 2018.

As highlighted within our macroeconomic section, EU manufacturing PMI has lost pace in 2018, another reason behind the lost volumes. In terms of demolishing containerships, January was weak and February even weaker. The months of March and April only had one containership each demolished. At such low pace we will not get to the 250,000 TEU in demolitions BIMCO expects. However, our estimate remains unchanged for the time being as when reality bites in selected places of the freight market, we expect demolition to pick up. Should demolition volumes only reach 100,000 TEU, the fleet would then grow by an estimated 5.0%.

We continue to see no large containerships being demolished, with a 2018-average of 1,840 TEU for the 14 demolished ships, as the large containerships are still quite new. The average size of a newbuild ships is 8,350 TEU. Overcapacity remains in the sector, where fleet growth is extremely uneven. Ordering of new capacity continues to fall below that of deliveries, bringing down the orderbook steadily. Currently 2.6 million TEU are on order, just 1/3 of the all-time-high level ten years ago, at 6.8 million TEU in July 2008.

Still, April had orders for ten 12,000 TEU (for 2020-2021 delivery) and four 14,300 TEU (for 2019-2020 delivery) Neo-Panamax ships ordered by Non-operating owners (NOO). The former ten ships are placed against long-term time charter with an operating carrier, whereas the charterer of the latter four ships (options declared) are yet to be disclosed. 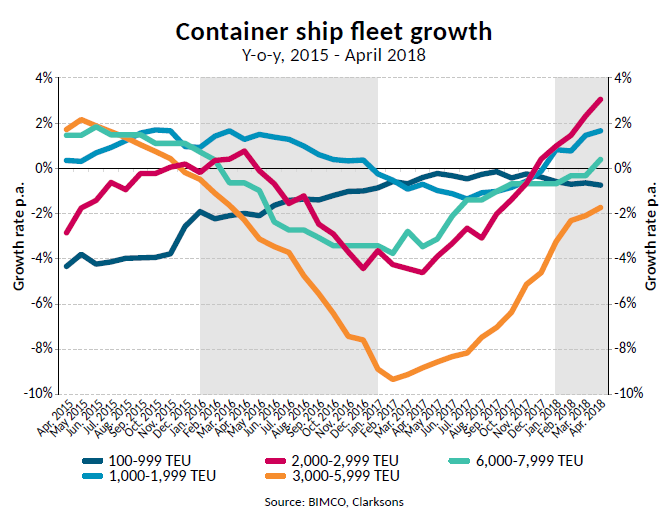 Looking into the sub-sectors of the container fleet, it’s a fact that fleet expansion over the past ten years has exclusively been happening in the +6,000 TEU sectors. With the growth rates seen amongst the largest sectors. This gives reason to look at the feeder fleets and the decline amongst those sectors.

Amongst the 3,000-6,000 TEU ships, the fleet of “old” Panamax ships has declined by 12% over the past two years, and the by 24% over the past six years, following the opening of the third set of locks for the Panama Canal.

Container lines constantly optimise their global networks and cascading continues across the board. Is there a limit to cutting capacity across the smaller sectors before the Ultra Large Container Ships can’t be fed properly any more?

Outlook: 2018 is off to a bumpy start. Demand is growing strongly into the US while import growth into Europe from the Far East is critically low. Overall, CTS reports a first quarter total container shipping demand of 40.6 million TEU, up by 4.8% on last year. This is in line with BIMCO’s expectation for the full year, improving the overall market conditions, while at the same time highlighting regional difference at large.

Whereas overall demand growth is solid, it’s weak on the Far East to Europe trade and freight rates in general are increasingly under pressure. Bearing that in mind, it seems premature to stop the demolition of containerships. Overcapacity is still around, and growth on high-volume trades is essential. Something has to change to turn the tide on freight rates.

Shedding a bit of light on trades other than the high-volume ones, over the past years, trades from Europe and the Far East to South & Central America has grown rapidly. For the full year 2017, the former grew volumes by 12% and the latter by 11%. Growth has stayed strong in Q1-2018, up by 13% and 15% respectively.

And putting it into perspective: the combined Q1-2018 imports into South & Central America from Europe and Far East accounted for 1.35 million TEU. For comparison, 1.34 million TEU went from the Far East into North America during the month of March only (Source: CTS).

Container shipping is also in the “line of fire” when it comes to the smouldering trade war between China and US. BIMCO see this as troublesome for the eastbound the transpacific trade.

In April, the International Monetary Fund adjusted its world trade volume forecast for 2018 up from 4.4% to 5.1% for advanced economies and up to 6.0% (+0.5) for Emerging Market and Developing Economies. Which is good news for container shipping, if it materialises. This is the result of expected higher GDP growth for Advances Economies which have a high trade multiplier for container shipping. In our previous container shipping market overview & outlook, we advised to watch out for the New York/New Jersey (NYNJ) inbound loaded containers, as we begin to see the full effect of the elevated Bayonne Bridge that opened for transit of Ultra-Large containerships in September 2017. If judged by the first quarter of 2018, the effect is massive. NYNJ imports are growing by 12.8%, up by almost 100,000 TEU on last year.