Dry Bulk Shipping: Markets are slowly improving from a very low level as the demand side falters

The shipping market and underlying profitability can only improve if the fundamental conditions (supply and demand) also improve. Therefore transportation of larger volumes, longer sailing distances in general or a lower increase of dry-bulk fleet size is a prerequisite for better markets to arrive.

On the first issue about more commodities, we have seen coal as the primary culprit so far, with grains potentially also sinking into the red before the end of the year. Volumes of steam coal and coking coal are both contracting notably, and our forecast is for an annual decline in transport driven by the lack of demand from China (-51 million mt) in the East and the UK (-13mt) in the West cushioned by increased appetite for imported steam coal in India (+16mt). Prospects for the latter have declined somewhat over the summer as domestic production and power-plant stocks both have risen.

The coal-exporting nations suffering from this decline in demand are the two giants, Indonesia and Australia, while US exports are down on lower UK imports.

On the positive side, the longer-than-normal grain season in South America has benefited primarily the Supramaxes, which apparently defy gravity as being the segment with the highest freight rates, while also facing the biggest increase in fleet size in the dry-bulk sector. Additionally, strong steel exports out of China have contributed to higher Supramax fleet use.

The second issue about tonâ€“miles has also come into play this year as a part of the decline in coal has cut off the longer trades at the expense of the shorter hauls. The complete absence of South African thermal coal exports to China for more than a year now is a devastating example of this, especially when it is substituted by non-seaborne imports. In 2014 South Africa supplied China with 5.2mt of thermal down from 12.4mt in 2013.

The third issue on fleet size will be discussed in the supply section of this report. 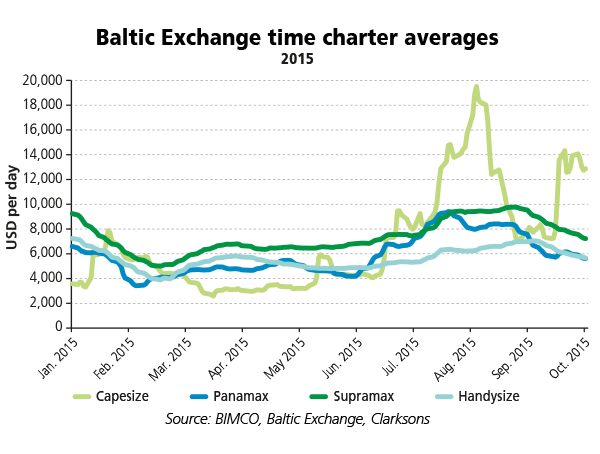 The freight rates for all dry-bulk segments have been low throughout 2015, the July/August spike for Capesize ships being the short-lived exception. Averages for the first eight months of 2015 range from USD 5,605 per day for a Handysize to USD 8,163 per day for a Capesize.

The poorest freight market on record is due to a combination of demand weakness and capacity abundance.

Unfortunately, there are no easy ways to escape this. As China is going through a period of transition that does not favour the dry-bulk shipping industry, the prime driver is out of the picture. Capacity has been abundant for years, so itâ€™s the change to the demand side, the variable that the industry cannot impact, which is at the epicentre in 2015.

Speaking of the contributing factors to an improved shipping market, the dry-bulk fleet has grown only marginally during the first nine months. The inflow of 39.7 million DWT, which has been offset by demolition of 23.8 million DWT, means a fleet growth of just 2.1%. Continuance of a low fleet growth is vital to achieving an eventual recovery and a return of sustainable earnings for the industry.

A central element in that equation is a low level of new orders. This has been accomplished by a landslide margin. In Clarksons orderbook statistics, there were only 84 new contracts recorded at the end of August. Such a cautious attitude is quite the opposite of what happened less than two years ago, when capacity equal to the year-to-date amount in 2015 (4.7 million DWT) was contracted in just 16 days!

Demolition also holds a key position in todayâ€™s and tomorrowâ€™s fleet-growth level. Although 306 ships have left the fleet so far in 2015, ownersâ€™ interest in making use of the demolition â€œtoolâ€ to limit supply growth seems to have evaporated completely over the summer. In early July, BIMCO cautioned that a new full year record level of demolished capacity would not arrive in spite of a record first half of the year. Unfortunately, our expectations have proven to be all too right. Spiking Capesize rates immediately cooled ownersâ€™ interest in the hope that a market rebound was around the corner. 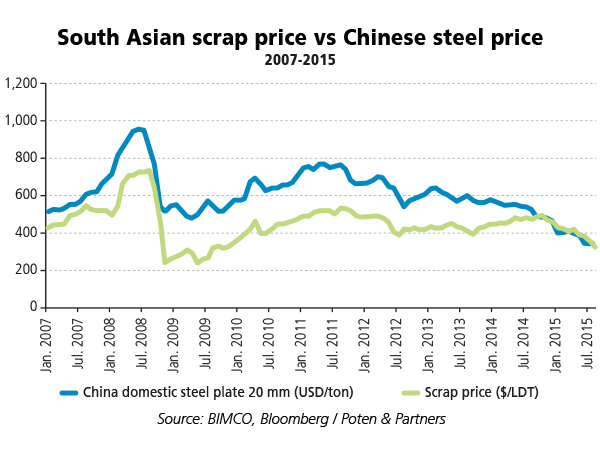 Furthermore, the strong Chinese steel export at discount prices to the countries that used to prefer scrap steel to new steel means that scrap prices keep heading lower and lower as volumes decrease. Only 37 ships were sent to the blow torch in July and August.

As trading conditions continue to challenge all shipowners and operators, everything that can be done to delay the delivery of the next ship has been done within the legally binding nature of a newbuilding contract. It is not easy to discuss terms with shipyards at a late stage in the building process, but the result is now clear. 2015 is about to receive â€œonlyâ€ 49 million DWT, which will bring fleet growth down to a 10-year low at 2.5%. 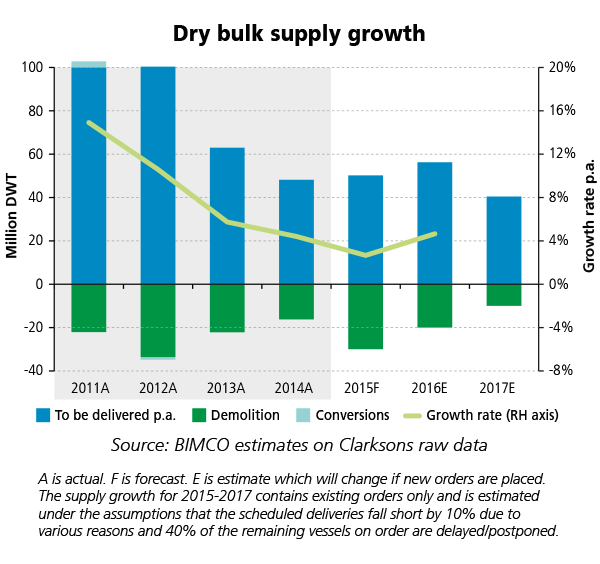 When traditional demand growth is not increasing, we need to look harder for future growth. Here the glut of high-iron-content ore in the international markets and the following low prices may finally bring around a sizeable substitution in consumption by Chinese steel mills, away from the domestically produced low-iron-content ore, in favour of imports.

Calculations done by BIMCO show that monthly imports into China could be 20mt higher per month (+26%). A total of an extra 240 million tons on an annual basis could bring deployment for around 155 Capesizes, assuming an unchanged distribution between Australian and Brazilian imports (75%/25%).

Last year, Australia grew its share significantly as 90% of Chinese incremental demand came from Australia. As Brazilian miner Vale is expecting to grow its output over the next year, this would improve the prospects. Working against would be more Brazilian ore transported on 400,000-DWT Valemax class ships operated by the miner itself or related parties.

For the coming months: September-November, BIMCO expects the supply of new ships to stay subdued and slow paced towards the end of the year. The deteriorating demand-side conditions are expected to be somewhat reversed as we move into the stronger months of the year. The vital commodities, coal and iron ore, are both expected to be in higher demand in coming months, enhancing ownersâ€™ and operatorsâ€™ opportunities to find employment for their ships. Altogether this should support the freight rates although no large-scale improvement to the fundamental balance is likely to develop.

[…] There you will find 28189 more Infos: shippingherald.com/bimco-shipping-market-overview-outlook/ […]

[…] There you will find 28092 more Infos: shippingherald.com/bimco-shipping-market-overview-outlook/ […]

[…] Informations on that Topic: shippingherald.com/bimco-shipping-market-overview-outlook/ […]

[…] There you will find 77886 more Infos: shippingherald.com/bimco-shipping-market-overview-outlook/ […]

[…] There you will find 70026 more Infos: shippingherald.com/bimco-shipping-market-overview-outlook/ […]

[…] Informations on that Topic: shippingherald.com/bimco-shipping-market-overview-outlook/ […]