Britain’s Other Irish Border Is Also a Big Brexit Problem 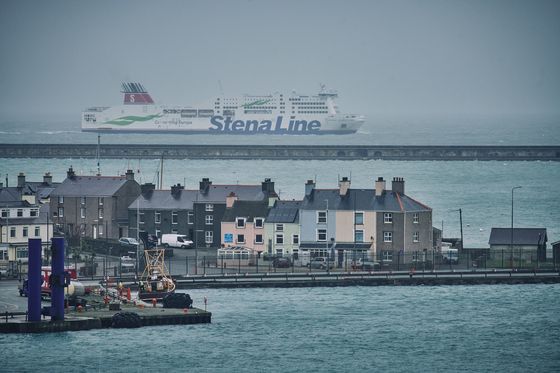 There’s an ominous number that keeps coming up in conversations among workers at the port handling the bulk of trade between the U.K. and Ireland: “the 29th.”

It’s the date at the end of March when Britain risks descending into chaos should politicians fail to agree on the terms of the country’s divorce from the European Union. The looming threat has meant Prime Minister Theresa May is now said to be considering extending the deadline.

The concern at Holyhead in northwest Wales is that the 1,300 trucks and trailers passing through each day will get snarled up in new checks should the U.K. tumble out of the EU’s customs union without a new arrangement in place.

This is the frontier that few people are talking about while the political energy focuses on preventing a land border between the U.K. province of Northern Ireland and the Republic of Ireland in the EU. Yet economically, it’s the most critical gateway for more than $40 billion of annual imports and exports, from meat and dairy goods to pharmaceuticals and even 1,000 horses a week as part of the bloodstock trade.

May hasn’t managed to secure any concessions from EU leaders to help her sell the Brexit deal that was firmly rejected by the U.K. Parliament last month. She’s now mulling a plan to delay Brexit and avoid a no-deal departure, according to people familiar with her thinking.

In another twist, Jeremy Corbyn, leader of the opposition Labour Party, also bowed to pressure from within his own ranks on Monday and said he would back a re-run of the 2016 Brexit referendum.

But the impasse—and threat to trade—continues. At Holyhead, trucks can complete the paperwork for boarding ferries to cross the Irish Sea in less than a minute, maximizing time on the road to keep to the hours a trucker is allowed to drive. If there’s no Brexit deal and customs checks are introduced, it’s anyone’s guess how long it might take.

The Welsh port is situated off the northwest coast and is seared in the Irish conscience as the historical gateway to the U.K. The town is now steeling itself for tailbacks and the possibility that an already depressed part of Britain will become even poorer as haulers seek alternative routes.

Traffic through the port is six times bigger than it was in 1993 when Europe’s seamless single market for goods, capital, services and labor was established. It’s the busiest roll-on, roll-off ferry port in the U.K. after Dover, which some businesses are now planning to avoid in favor of container terminals more associated with ocean-going cargoes to Asia.

“The frictionless border is good for our business,” said Nicholas Whatmore, managing director of Road King, which is expanding its truck stop near the port to build a 78-room hotel, horse stables and other facilities. A no-deal Brexit might initially boost business as truckers get stuck in the area, “but longer term it would have a negative effect as people seek alternatives,” he said.

The drivers sitting around him at the company’s truck stop on the outskirts of Holyhead talked of their fears for the future. As they refueled themselves with the classic British bacon and eggs and other fried food before long drives across Europe, some declined to give their full names because they see rounds of job losses should May’s gambit of running the Brexit clock down fail to yield an agreement.

If customs checks are introduced “my job will be impossible,” said Ivan, a 43 year-old driver from eastern Europe who takes food across the Irish sea. “Salads need to offload the same day. If I wait for the customs, I don’t know what will happen.”

Another, Joe, who drives for a family-run Irish trucking company, said delays would force out smaller operators like his because they will be less able to soak up the extra costs. The 39-year-old’s main concern is if he’ll still be able to pay his mortgage.

The problem facing many drivers is that any delays would eat into crucial hours on the road. Regulations limit how long they can drive in a given day. Just-in-time services for companies like FedEx Corp.’s TNT unit will become harder to fulfill.

John Dixon, 50, who carries loads for TNT between Dublin and London, said he’s permitted to drive for nine hours in a 15 hour spread. If he doesn’t make it to the U.K. capital within his time allocation, he has to pull over.

“We start at 5 a.m. in Dublin, by 8 p.m. we must be parked in London, and if you can’t make it they have to bring their own trucks up to get the trailers,” Dixon said as he sat in his cab preparing for another run. “Then you’re running into big costs. For us to lose an hour would be okay, but for us to lose anything over that would be a problem.”

The U.K. government this month promised a temporary window in the event of a no-deal Brexit to streamline customs, safety and security processes at ports while any additional infrastructure is put in place. In the most recent guidance, the U.K. tax authority said haulers will be able to make declarations away from ports and delay payment of duties.

Bosses at Holyhead, meanwhile, are meeting with local authorities, emergency services and customs officials to draw up contingency plans for March 29. Carl-Johan Hagman, chief executive officer of port operator Stena Rederi AB, said at the World Economic Forum in Davos last month that the company doesn’t have a plan because it was too hard to prepare for the “major disruption” that a no-deal Brexit would cause.

“We’ve made it very clear to the U.K. government the risks that it would pose if they started to implement checks,” said Ian Hampton, Stena’s chief communications officer. “It’s not just filling out the form it’s if they need to start physically start checking vehicles, that’s when you get the delays.” If the government sticks to its promises, then operations won’t be disrupted, he said.

Still, some Irish haulage companies are looking at avoiding the U.K. as a stepping stone to mainland Europe and switching to direct ferry routes from Ireland to France, Belgium, the Netherlands and Spain. CLdN Cobelfret SA, Irish Ferries and Brittany Ferries have all added extra roll-on, roll-off capacity on direct routes to Europe.

About 150,000 vehicles cross the U.K. on their way from Ireland to continental Europe each year, according to a report published by the Irish government in November. And some of the drivers are more optimistic than their colleagues that a way will be found to maintain the free-flow of traffic.

“There’s a lot of scaremongering going on,” said Les Davidson, 52, a trucker from Northern Ireland. “The politicians need to talk to people with brains, to academics, and they can sit down and work it out.”

In Holyhead’s town center, which is linked to the port by a sinuous stainless steel bridge part-funded by the EU, boarded up shops and pubs reveal a community that’s already experienced a steep decline.

The vehicle ferries have meant that most passengers and truckers by-pass the town on their way to and from Ireland. But businesses know that the hotels and restaurants quickly fill up when ferries are delayed—and while they fear for the consequences of haulers finding other routes, the introduction of customs controls might have some upside.

“This town’s dying anyway so God help us,” said Sherry Ritson, 54, as she closed up the Holly Molly Cafe in the town center. “But if the truckers are held up they might come in to have something to eat. It’s potentially a silver lining.”