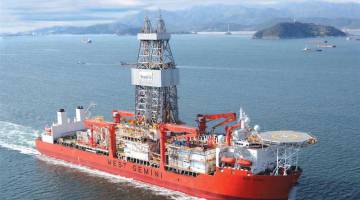 Oil and Natural Gas Corp., India’s biggest explorer, is preparing to spend on its biggest ever crude binge as sub-$50 oil halves the cost of rigs and services.

State-run ONGC is contracting as many as five deepwater drill ships and dozens of jack-up rigs as it launches a $5-billion development program in the Krishna-Godavari Basin off the east coast of India, Chairman Dinesh Kumar Sarraf said in an interview. The company wants to make use of the drop in hiring rates for vessels and oilfield services to lower costs and boost profit, he said.

“This is the largest ever campaign undertaken by us,” Sarraf said. “Never in the past have we had five rigs in offshore deep-water at one time. We believe this is the right moment when we can increase our investment.”

The company, which intends to spend 11 trillion rupees by 2030 to raise output, is key to Prime Minister Narendra Modi’s target of cutting import dependence by 10 percent in the next six years. That goal is crucial for a country that imports most of its oil. India will be the fastest-growing crude consumer in the world through 2040, according to the International Energy Agency.

“It makes immense sense for an oil explorer to undertake capex in the current times when oil field services costs and charter rates have dropped so sharply, especially if they have strong financial profile,” said K. Ravichandran, co-head, corporate ratings at assessor ICRA Ltd. “Lower debt in relation to reserves gives ONGC exceptional strength in comparison to others.”

Offshore jack-up rigs which cost as much as $90,000 a day when oil was surging, now cost about half that, Sarraf said.

The flagship explorer in Asia’s third-largest economy is betting its spending will pay off once oil prices revive. Production has declined in fields accounting for almost three-quarters of ONGC’s output, adding pressure to bring on stream new assets.

“While the big investments are going to help ONGC in the long term, it can strain the profits in coming years if crude prices were to remain around $50 a barrel levels,” said Dhaval Joshi, a Mumbai-based analyst at Emkay Global Financial Services Ltd.

ONGC is working on as many as six large projects on its western offshore fields and plans to spend about 300 billion rupees ($4.5 billion) during the fiscal year that started April 1.

The company has awarded 36 major contracts across the country’s eastern and western coasts, worth a total 340 billion rupees, in the past year-and-a-half, including 13 offshore rigs.

“We expect production would increase this year,” Sarraf said. “That’s why we need to add more and more fields.”

The company expects to start gas output from the KG-basin block by mid-2019 with a peak production of 15 million standard cubic meters a day. Crude oil output will begin a year later and may go up to 77,000 barrels a day.