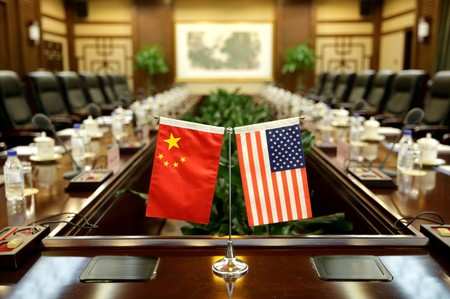 China and the U.S. have agreed to roll back tariffs on each other’s goods in phases as they work toward a deal between the two sides, a Ministry of Commerce spokesman said.

“In the past two weeks, top negotiators had serious, constructive discussions and agreed to remove the additional tariffs in phases as progress is made on the agreement,” spokesman Gao Feng said Thursday.

“If China, U.S. reach a phase-one deal, both sides should roll back existing additional tariffs in the same proportion simultaneously based on the content of the agreement, which is an important condition for reaching the agreement,” Gao said.

If confirmed by the U.S., such an understanding could help provide a road-map to a deal de-escalating the trade war that’s cast a shadow over the world economy. China’s key demand since the start of negotiations has been the removal of punitive tariffs imposed by President Donald Trump, which by now apply to the majority of its exports to the U.S.

“The question right now is what the two sides have actually agreed on — the market’s focus has shifted to how the U.S. may react to China’s tariff remarks tonight or in coming days,” said Tommy Xie, an economist at Oversea-Chinese Banking Corp. “Investors are still cautious.”

The two sides continue to negotiate over where and when a “Phase One” deal would be signed. Gao said he had no further information on the location or timing.

U.S. locations for a Trump-Xi meeting that had been proposed by the White House, including Iowa and Alaska, have been ruled out, according to a person familiar with the matter. Locations in Asia and Europe are now being considered instead, the person said, asking not to be identified because the discussions aren’t public.

On Thursday, China sentenced three nationals to maximum punishments for smuggling fentanyl to the U.S., in one of its highest-profile moves yet against the illicit flow of opioids that Trump has made a bone of contention in broader trade talks between Washington and Beijing.

In another move, China’s General Administration of Customs and Ministry of Agriculture are studying the removal of curbs on U.S. poultry imports, Xinhua reported, without providing more details.

Trump administration officials in recent days have expressed optimism that phase one of a comprehensive trade deal might come together this month, helping boost equity markets to records this week.

Given repeated reversals in the more than year-long trade war, investors are waiting for further confirmation of progress between the two sides.

“I am skeptical on how fast the progress will be,” said Iris Pang, economist with ING Bank NV in Hong Kong. “How fast the roll back will be is critical to get material and long lasting positive sentiment for the market as well as for both economies.”