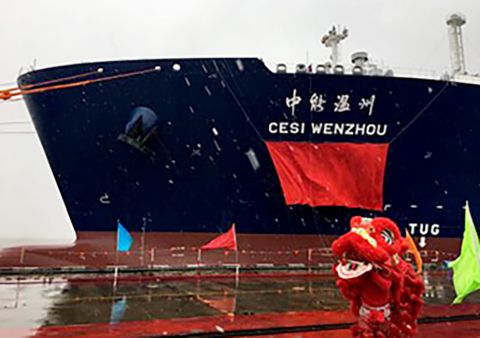 China’s largest refiner, Sinopec, will delay making any purchases of U.S. oil for September amid concern that the Asian giant will slap tariffs on American crude, making imports more expensive, according to a person familiar with the matter. Beijing declined to stop imports from Iran, dealing a blow to U.S. efforts to isolate the Islamic Republic, though it agreed not to increase shipments, according to officials familiar with the negotiations.

Petroleum was left off the list of products on which Beijing said Friday it plans to levy duties of 5 percent to 25 percent as soon as the Trump Administration enacts measures. The world’s biggest oil importer took a record volume from the U.S. in June, increasing the potential hit to American producers if China does enact tariffs.

The Trump administration has warned that even allies would face sanctions if they didn’t show “significant” progress in reducing Iranian oil purchases by Nov. 4, ruling out broad exemptions or waivers.

The Chinese state-run firm is waiting until it is clear when or if China’s 25 percent tariff threat on U.S. crude imports might begin, the person said. Friday’s announcement of additional tariffs on liquefied natural gas and other products comes as President Trump has directed U.S. Trade Representative Robert Lighthizer to consider increasing proposed tariffs on $200 billion in Chinese goods to 25 percent from 10 percent.

Sinopec had already been reducing its U.S. oil purchases, mainly because the discount for West Texas Intermediate crude against international marker Brent had narrowed. In July, the company bought four supertankers, compared with six to seven in June. The state-run firm didn’t purchase any U.S. crude for August loading for similar reasons, the person said. Unipec, the trading arm of Sinopec, buys oil for the refiner.

China took 15 million barrels of U.S. crude in June, the most in data going back to 1996, according to U.S. Census Bureau and Energy Information Administration. Sinopec media officials in New York didn’t return an email or phone call request for comment.

India could step in to buy some of the displaced oil if Chinese demand dissipates.

“With China out of the picture, India could take another few hundred thousand barrels a day of U.S oil,” Matt Smith, ClipperData LLC’s director of commodity research, said by phone. The South Asian country is already starting to take more U.S. crude and volumes will average 200,000 barrels a day in July and August, he said.

Indian refiners won’t entirely fill the void left behind by China, since it has other suppliers, he added. Other potential buyers in Asia could be South Korea and Taiwan, he added.

Also, India’s refineries are designed to process heavy, high-sulfur Iranian crude, which has been sanctioned. The majority of new American production is light, sweet shale oil.

Other potential buyers in Asia could be South Korea and Taiwan, Smith said.

Trans-Atlantic markets could pick up some of the slack. Unlike Asia, the European market is already saturated with American oil, and has plenty of alternatives from the Atlantic Basin including West African and North Sea crudes.

“Asia would basically be where the bulk of the Chinese volume would go instead of Europe,” Smith said.