21 May 2020
by ShippingHerald Analysis, Containers, Headlines, Slider, The Wire 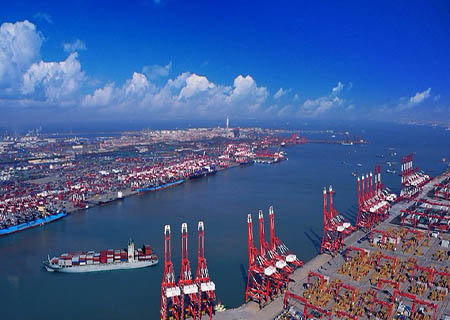 Throughout April, container shipping spot freight rates on the back-haul trade from North Europe to China were higher than those on the front-haul trade from China to North Europe. This is a rare occurrence that has developed in the wake of the massive supply chain disruptions in the world’s #1 manufacturing hub due to the Covid-19 outbreak, causing aftershocks across the Far East.

“A reversal of front-haul and back-haul spot freight rates is a rare event. Especially on a high-volume main trade route like the Far East to Europe, which normally holds a 2:1 ratio.
As capacity has been cut decidedly and fast by all carriers to better fit the evaporating demand for containers out of China, much improved utilisation on the Europe to China back-haul trade has put carriers in a position to command higher spot rates.

April was unique in that way, and the phenomenon is gone for now. Spot rates out of the main China ports are fixed at $1,453 per FEU heading for North Europe discharge, against $1,356 per FEU for containers going east on 19 May,” Peter Sand, BIMCO’s Chief Shipping Analyst says. When two boxes go West, only one heads East

On most main container trade routes, there is a ‘mismatch’ between loaded container volumes. On the Far East to Europe trade, that ‘mismatch’ is 100%. Under normal market conditions, carriers deploy capacity to match demand on the front-haul of the trade, where the payload is highest. One the back-haul, more empties and shipping capacity are repositioned, and costs are only to a limited extend covered by freight rates.

Boost in confidence – boost in rates

February proved to be a turning point for the spot freight rates as volumes ended almost on par for that month, since 634,000 TEU went east and 690,000 went west. But the relative strength made all the difference. Whereas eastbound back-haul volumes from Europe to Far East went up by 1%, front-haul volumes fell by 32%.

Carriers announce General Rate Increases (GRIs) or specific surcharges in the lead-up to starting many new months. In contrast to last year, the relatively higher back-haul volumes, made Peak Season Surcharge (PSS) on the North Europe to Far East Trade sticky in 2020. The pendulum that swung negotiation power from shippers to carriers was repeated in April, lifting back-haul spot rates even further and above the sliding front-haul spot rates.

Data on moved volumes for April and May are currently pending, but they are likely to pinpoint these developments.

Blanked sailings on the front-haul trade out of Far East towards Europe during week 20 (11-17 May) are estimated to have reached 28% of total trade lane capacity. May is likely to see a peak in blanked capacity.

For the coming weeks, to end-July, carriers are expecting higher cargo volumes on the front-haul, despite the seasonally lower nature of May-July. Blanked capacity currently announced account to 12% of total trade lane capacity, as fewer sailings are blanked and fewer were initially planned for (source: Sea-Intelligence).

“Intra-Asian cargo movement, which is the bellwether indicator for volume growth on the main export trade lanes out of the Far East explains the current hardship in capital letters, while pointing towards only a gradual easing of the pain.