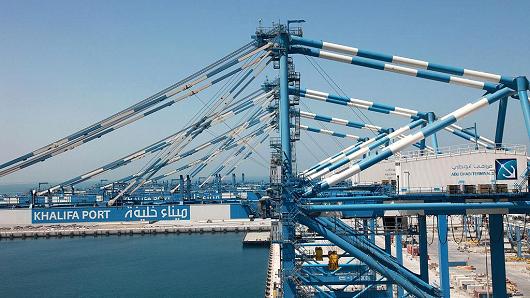 Five Chinese companies have agreed to spend a total of $300 million in a deal with Abu Dhabi Ports, deemed a “milestone” by CEO Mohamed Juma Al Shamisi.

In a deal struck through the Jiangsu Provincial Overseas Cooperation and Investment Company, the companies have signed a lease on 2.2 square kilometers of the Free Trade Zone of Khalifa Port, which the United Arab Emirates (UAE) firm Abu Dhabi Ports oversees.

“The Chinese companies established within the free zone will sub-lease to five factories to start with,” Al Shamisi explained.

The move is in line with China’s One Belt, One Road infrastructure project to revive ancient trading routes, which is thought to be the biggest foreign spend ever by any country.

This is not the first time the China and the UAE have collaborated. In 2015, the two countries established a joint investment fund worth $10 billion.

The promising economic potential of the UAE was one of BMI Research’s findings in its Global Industry Investment Attractiveness report, published Friday.

The UAE ranked in the top 10 percent of countries for five out of the nine sectors measured: power, infrastructure, renewables, upstream oil and gas, and food and non-alcoholic drinks. It was the best performing emerging market in BMI Research’s Risk/Reward Index.

“This is impressive considering that the UAE has a relatively small market size (0.5% of global GDP) compared to China (15.2% of global GDP), for instance,” BMI Research said in the report.

This positive sentiment come as a surprise considering the UAE’s involvement in an ongoing diplomatic spat with nearby Qatar and the tumbling price of oil in recent years.

Marina Petroleka, head of energy and infrastructure research at BMI Research, told CNBC’s Street Signs Monday that the UAE has “good project pipelines” and a “good demographics profile,” meaning that it was “quite ahead of the curve compared to some other GCC countries when it comes to diversifying … away from oil.”