While grain markets may yet shrug off Russia’s blockade of a shipping chokepoint in the Black Sea region, the incident highlights the risk of disruption to a critical source of global supply.

Russia cut off access to the Kerch Strait between the Sea of Azov and the Black Sea after tensions with Ukraine flared up over the weekend. Russian warships opened fire on a group of Ukrainian military vessels in neutral waters that had tried to enter the strait. Shipments resumed Monday, Tass news service reported, citing the state-run company that manages shipping in the region.

The waterway was described in a Chatham House study as a “chokepoint of regional significance” in the global food trade. It’s a major export channel for Black Sea grain, oil, minerals and timber, according to the 2017 report. Chicago wheat futures climbed as much as 1 percent on Monday while corn was little changed.

The blockade shows the threat of disruption to Black Sea supplies just as the global grains market is buffeted by the trade war between the U.S. and China. Wheat has jumped about 20 percent this year in Chicago as heat and dryness worldwide curbed output, including in the Black Sea.

Shipments from Russia, the world’s top exporter, have dominated global trade so far this season, though they are widely expected to slow at some point following a smaller crop. Winter weather has recently begun to hinder some port operations.

The incident underscores the transport risks in a region that’s becoming an ever more critical supplier of grain to the global market, and exports of grains could fall if the situation worsens, said Cherry Zhang, an analyst with Shanghai JC Intelligence Co.

Most Russian wheat is loaded on ships in the deep waters of the Black Sea, but those ports have reached their limit. So as a work-around, traders are putting more grain on small ships in the Sea of Azov, the world’s shallowest sea, and sending them to deeper water to transfer the cargo to larger vessels. Ports include Rostov-on-Don and Azov in Russia, and Berdyansk and Mariupol in Ukraine.

Russia exported almost 7 million metric tons of grains and pulses from Sea of Azov ports in the seven months through January, according to U.S. Department of Agriculture data. That’s about 23 percent of the country’s total shipments for the period. Almost 60 percent were from deep-water ports on the Black Sea.

While Russia ships a significant amount of grains through the strait, it’s unlikely to block its own cargoes, otherwise it would be “shooting itself in the foot,” said Darin Friedrichs, a risk management consultant at INTL FCStone Inc. in Shanghai. That means the impact on grains markets should be “relatively limited,” he said. Berdyansk and Mariupol account for about 9 percent of the country’s exports, he said.

Global commodity markets are exposed to a number of maritime chokepoints around the world, from the Straits of Malacca to the Suez Canal. Any disruption to shipments through these waterways can lead to supply delays, potentially pushing up the cost of transportation and commodity prices.

Earlier this year, Russia completed a 19-kilometer (12-mile) bridge across the Kerch Strait, prompting complaints from Ukraine that it was being used to delay its ships, exert political pressure and hurt the country’s economy.

A UN Security Council meeting has been called for 11 a.m. on Monday, according to U.S. Ambassador Nikki Haley. NATO has urged “restraint and de-escalation,” adding it fully supports Ukraine’s sovereignty and called on Russia to ensure unhindered access to Ukrainian ports in the Azov Sea. 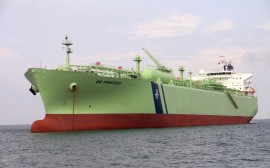 In the first quarter, BW LPG reported a net profit after tax of USD 81… 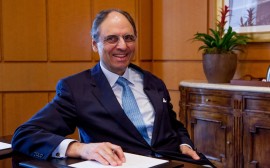 Dorian LPG: Too early to assess how market