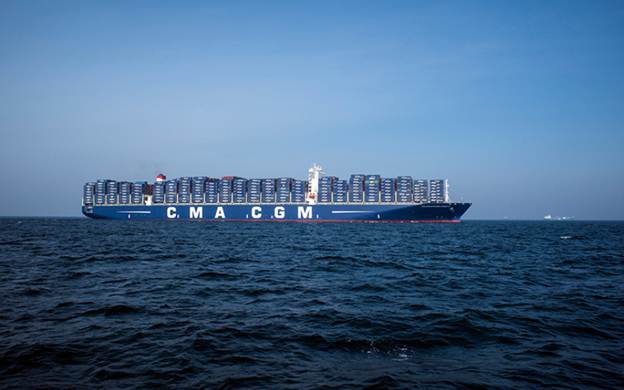 CMA CGM announced that the CMA CGM BENJAMIN FRANKLIN, an 18,000-TEU vessel named in honor of one of the United States’ founding fathers, will call at the port of Los Angeles on December 26, 2015.

It will be the largest container ship of this capacity ever to call at any port in the United States. The vessel will later call at the Port of Oakland on December, 31.

Jacques R.Saadé, Group Chairman and Chief Executive Officer, decided to deploy an 18,000-TEU capacity vessel to the U.S.: the Group will be the first carrier to call at a U.S. port with vessels of this size. With this call, CMA CGM is furthering its strategy of providing customers with the reach of a global network combined with the convenience of a personal service. It also reflects CMA CGM’s faith in the long-term growth potential of the U.S. economy, and its commitment to increasing its U.S. market share.

A pioneer in deploying large-capacity vessels to the U.S., the CMA CGM Group has been working closely with the Ports of Los Angeles and Oakland to ensure there is sufficient infrastructure to support an 18,000 TEU vessel. The Group looks forward to working with other ports throughout the U.S. as they begin similar assessments of their infrastructure.

CMA CGM is today the third largest container shipping company in the world offering innovative sea, land and logistics solutions on all 5 continents. CMA CGM entered the US in 1997 and today has an active and growing presence. It now offers 23 shipping lines connecting the U.S. to the rest of the world and employs more than 800 people in the country through its subsidiary CMA CGM (America) LLC.

The CMA CGM BENJAMIN FRANKLIN will be deployed on the Pearl River Express, a service connecting the main China ports, including Xiamen, Nansha and Yantian, with the U.S. West Coast ports. The vessel, built with state-of-the-art technology, was delivered on December 4, 2015.