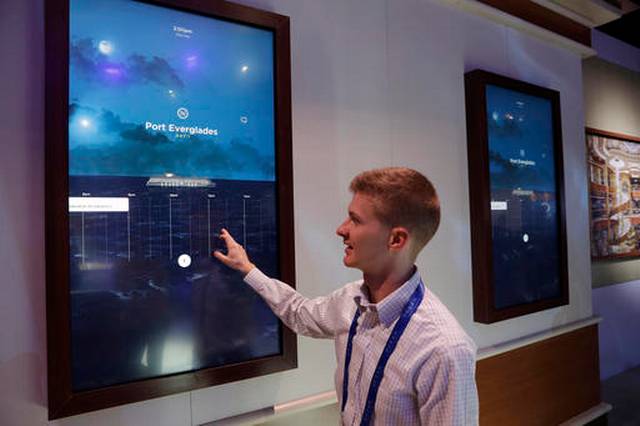 Carnival Corp. is unveiling wearable technology that allows cruise ship staff to personalize service at sea, whether it’s knowing a guest’s favorite drink or wishing them a happy birthday.

The world’s largest cruise operator plans to roll out its OceanMedallions on Princess Cruises starting in November. The quarter-size medallions can be worn like a watch, a necklace or kept in a pocket. Like a similar gadget used by Walt Disney Co., it serves as a room key and an electronic wallet for onboard shops. The device recognizes guests in hallways, creating projections on screens that can alert cruise patrons when their shore excursion is leaving.

The Miami-based company spent “several hundred million” dollars developing the technology, according to Chief Executive Officer Arnold Donald, who expects to see a payback in more returning customers, on-ship purchases and higher ticket prices. It’s the latest effort by a travel company to use wireless electronics to personalize and improve service.

“Because it’s giving the guests exactly what they want, they’ll spend more,” Donald said in an interview.

Airlines, hotels, theme parks and movie theaters are increasingly using mobile devices to enhance customer service and interaction. Carnival and other cruise operators already use apps to update guests on activities and let them monitor their account balances. Royal Caribbean Cruises Ltd. offers rubber wristbands with radio-frequency chips to speed check-in at ports. Donald is scheduled to discuss his medallion technology Thursday at the Consumer Electronics Show in Las Vegas.

The medallion program is modeled after the MagicBands that Disney debuted at its Orlando, Florida, theme parks in 2013. John Padgett, who helped design Disney’s bands, was hired by Carnival two and a half years ago to create its program.

Like the Disney product, Carnival’s device works with an app, allowing guests to make restaurant reservations, order a drink or receive an alert when a fully booked show has an open seat. The medallions store information about guests, such as how many cruises they have been on and who they are traveling with, so crew members have something to chat with them about.

Because it monitors guest activity on the ship, Carnival can offer, say, casino chips to someone who spent a lot of time gambling, even if the customer had previously indicated he or she was interested mostly in fitness activities, according to Padgett.

“We’re able to use real-time info to adapt the service offering,” he said in an interview.

Disney’s wristbands, which serve as room keys, admissions tickets and credit cards at the parks, were part of a $1 billion technology upgrade at the company’s Florida resorts. While Disney has said customers are delighted by the bands, the company hasn’t extended them to its other parks around the world. Today’s ubiquitous mobile devices perform many of the same functions, such as storing tickets or credit-card data.

An 18-year Disney veteran, Padgett and his team worked with some 20 contractors for more than two years developing the Carnival technology. The medallions don’t track guests throughout the ship but identify them in specific situations, Padgett said. The encryption in the device meets or exceeds the security used by banks and in passports, he said.

Guests who choose to use the technology receive the medallions in the mail before their voyage. The information stored in the devices also speeds up their check-in.

Carnival’s technology is hardware-intensive, requiring the installation of some 7,000 sensors and 128 video screens per vessel. The company will have the devices working on all of the Princess line’s 19 ships in about two years, Padgett said.