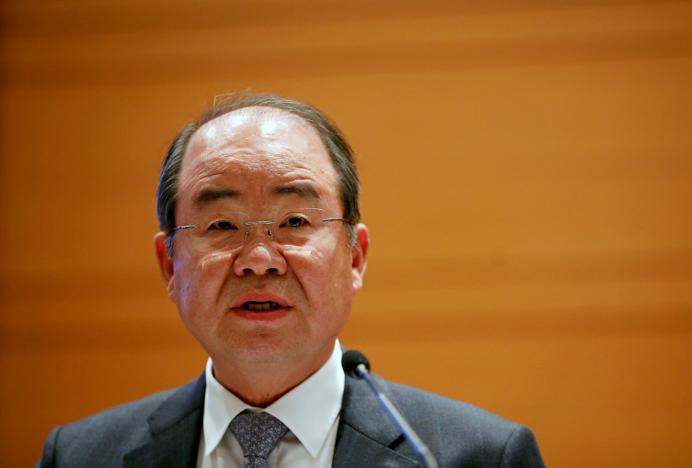 Daewoo Shipbuilding & Marine Engineering Co Ltd’s CEO Jung Sung-leep said he believes he should step down from the top position if the cash-strapped South Korean firm is unable to turn a profit this year.

South Korean state banks have said they are preparing a fresh $2.6 billion bailout for Daewoo Shipbuilding, which has racked up huge losses from offshore projects and risks missing debt repayments this year.

Already bailed out in the aftermath of the Asian financial crisis of the late 1990s and supported again in 2015, Daewoo’s financials have deteriorated rapidly due to delays and trouble building complex offshore facilities. It posted a record net loss of 3.3 trillion won in 2015 and stayed in the red in 2016.

“Although there might be problems with liquidity, that has nothing to do with winning orders this year,” CEO Jung told reporters on Friday. “Because we are full this year with orders already won, this year’s profits depend on how well we make the ships according to prediction.”

“If by some factor we do not make a profit this year, it would be due to my shortcomings, and I must naturally step down,” CEO Jung added.

But, of the three, Daewoo’s situation is the most difficult.

Without the infusion of funds, Daewoo is not expected to be able to redeem 940 billion won ($838.27 million) in corporate bonds maturing this year – starting with 440 billion won due in April, the country’s financial regulator said on Thursday.

Daewoo has raised only 1.8 trillion won, of the 5.3 trillion won in asset sales and cost cuts it had pledged to raise starting in October 2015, when creditor banks began infusing billions of dollars to revive the shipbuilder.

Jung said a construction unit, another non-shipbuilding unit, and a shipyard in Romania were all in talks with potential buyers. “We’ve expanded our asset sales and cost-cutting plan three times,” Jung said. “There is nothing else to sell.”

Daewoo will seek an agreement with the labour union to cut more personnel costs, Jung said, without elaborating.

Daewoo has slashed about 3,000 employees since October 2015, and currently directly employs about 10,400 people.

CEO Jung said he expected Daewoo to receive considerable calls from shipowners for “builder’s default”, cancelling existing orders, if the company goes into court receivership – the regulator’s alternate plan for the troubled firm in case the bailout does not go through.

Company leadership will do its best to convince stakeholders that hold Daewoo debt, such as world’s No.3 pension fund National Pension Service, that backing the government’s plan for debt-equity swaps and grace periods is the most rational decision, Daewoo CFO Kim Youl-jung said.

National Pension Service holds about 390 billion won in Daewoo corporate bonds, Yonhap reported. A spokeswoman for the fund said it was considering the matter, but did not give any further details.