The dry bulk market faced a lot of headwind in 2015 as dwindling demand and over-supply created very unfavourable market conditions.

2016 has shown no improvements so far and prospects for the rest of the year are not looking promising. With poor earnings across the board the average scrapping age has dropped among all the dry bulk segments.

The capesize segment especially has seen a big drop in the average scrapping age; dropping almost four years from an average age close to 25 in 2014 to less than 21 in 2015. This is the result of a record amount of capesize tonnage that was scrapped in 2015. 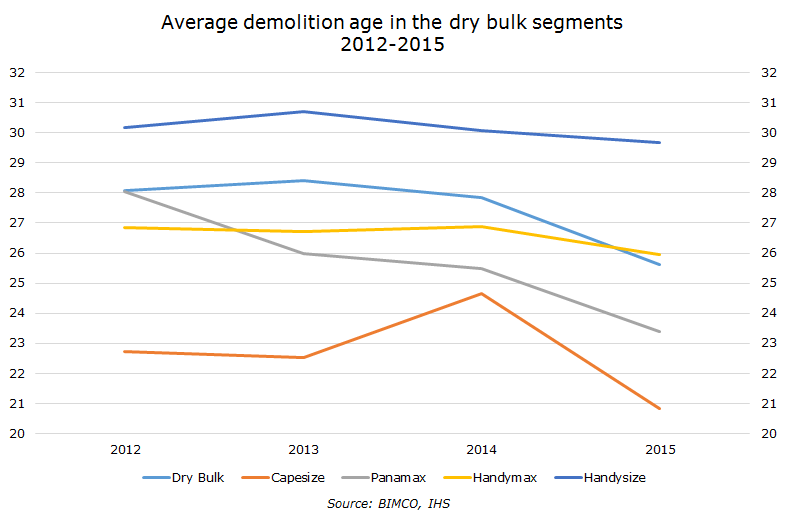 Chief Shipping Analyst, Peter Sand says: “Despite a relatively low demand for scrap steel in 2015 the demolition of dry bulk ships was high compared to previous years, and the capesize segment was the leader of the pack.

A total of 15.5 million DWT of capesize tonnage was sent for demolition in 2015 – more than half of the total 30 million DWT of dry bulk tonnage scrapped.

The extensive demolition activity within the dry bulk shipping industry is expected to continue to climb through 2016. So far, the year has already started well with 4.6 million DWT scrapped in January alone. This increasing demolition is a very welcome development, but a lot more ships need to be scrapped in order to improve on the unfavourable market conditions present in the dry bulk market.”

The average demolition age follows the state of the market or at least the sentiment in the market. 2013 was one of the most volatile years for dry bulk shipping. After a very weak first half, things got better towards the end of the year. The improvement was partly due to some intensive stockpiling ahead of the Indonesian ban on exporting unprocessed mineral ores, posed to go into effect from the beginning of 2014. As the ships were kept busy towards the end of the year scrapping remained low and the average demolition age climbed slightly.

In 2014 the tumbling demand from import giant, China, hit the market hard. With an increase in hydropower generation, Chinese imports of thermal coal including anthracite, became the biggest disappointment, despite lower prices. Dropping from 192 million tons in 2013 to only 165 million tons in 2014. This development continued into 2015 where imports reached another low of only 108 million tons.

Iron ore prices also dropped, however contrary to thermal coal, buyers took advantage of the low price, and volumes rose. Unfortunately, short-haul trading out of Australia covered almost all of the new demand.

Peter Sand adds,, “China’s appetite for raw materials has been a major driver for the dry bulk market and with the current slowdown and different direction of its economic development, the appetite for major dry bulk commodities has stalled. The decreasing age of dry bulk ships being scrapped, is a mirror image of the tough challenges currently facing owners and operators in the dry bulk market.”

Although a stronger permanent growth on the demand side would provide the biggest relief, this seems unlikely in the near future. Alternatively increased scrapping could be a way to improve the fundamental imbalance between supply and demand in the dry bulk shipping market.”