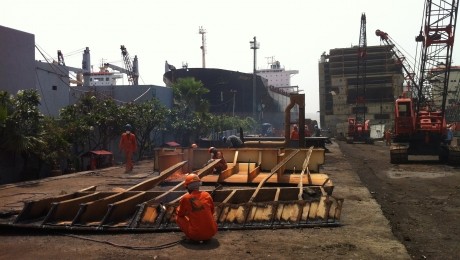 The Danish Minister for the Environment and Food has taken the first steps towards implementing rules for safe recycling of vessels, ensuring that people and the environment on a global scale will be better protected.

Worldwide, approximately 1,000 merchant vessels are being scrapped every year in order to recycle valuable materials, such as steel. The vast majority of vessels are sent to Asia to be dismantled under at times questionable conditions in countries like India and Bangladesh where the focus on the environment and working conditions is not comparable to Europe.

The Minister for the Environment and Food, Esben Lunde Larsen has now launched a new proposal, which will ensure that Denmark can ratify the so-called Hong Kong Convention; a global agreement to ensure that ship recycling is done in a proper way, so that both people and the environment are protected from harmful substances.

“It can be overwhelming to see the conditions under which vessels are scrapped at the shipyards in Asia. Therefore, it has been a major priority to adapt the Danish rules so we can ratify the Hong Kong Convention, which helps to establish global standards for safe ship recycling. It should send a strong signal to other countries – the more countries ratify the convention, the faster the Convention will enter into force,” says The Minister for Environment and Food, Esben Lunde Larsen.

According to the Danish Shipowners’ Association, ten Danish operated vessels are in average being recycled every year. A small part is recycled in Denmark, and the rest is recycled mainly at shipyards in India, China and Turkey.

A need for global rules on ship recycling

The Hong Kong Convention was adopted by the UN International Maritime Organization in 2009. Parts of the Convention have already been adopted in the EU with the Ship Recycling Regulation, and with Denmark’s ratification the possibility of more countries doing the same increases.

“It is very positive that the Minister now ensures that Denmark will ratify the Convention. Up to 70 percent of the world’s ship recycling takes place in third world countries, so global rules are essential to ensure that recycling is done in a responsible manner. We must therefore push for more countries to follow suit so that the Convention can finally enter into force. Until that happens, we encourage all our shipping companies to meet the future requirements voluntarily,” says Anne H. Steffensen, Director General and CEO of the Danish Shipowners’ Association.

The new rules were recently submitted for consultation and Denmark expects to ratify the Convention in the spring of 2017.

– The UN’s International Maritime Organization (IMO) adopted with support of more than 60 countries in May 2009 the Hong Kong Convention on ship recycling in terms of environment and safety of the workers.

– For the Convention to enter into force, it requires notably that it must be ratified by at least 15 countries whose combined merchant fleet represents at least 40% of the global merchant fleet’s gross tonnage.

– Both major flag states and the major ship recycling states must ratify in order to meet the requirements of the convention. Only Norway, Congo, France and Belgium have ratified the Convention.

– In 2015, 768 vessels were globally sold for recycling. 469 of these (equivalent to approximately 60 percent) were recycled on a beach in Bangladesh, India or Pakistan (Source: Shipbreaking Platform annual report for 2015).