The current newbuilding prices for dry bulk ships has dropped so much that they just passed the lows of 2012 heading downwards and are now at the lowest level since 2003.

This could potentially sway owners into buying new ships feeding even more into the already oversupplied fleet and worsening the condition of the dry bulk market even further. However, it appears that the owners are keeping their cool and not jumping on the low prices.

“The fact that ship owners have refrained from ordering new dry bulk ships despite the low newbuilding prices is positive for the future dry bulk market.

However, for there to be an actual shorter-term improvement in the market we would need to see a spike in demand or a substantial reduction of the fleet.”

All in all, dry bulk contracting has gone down substantially in 2015 compared to 2014. So far this year the total volume of new contracts placed at yards in one of the three big shipbuilding nations China, South Korea and Japan is just 11.3 million DWT. This compares to 58 million DWT of dry bulk capacity contracted last year in the same three nations.

Although orders have remained remarkably low through the year, one order by Nippon Steel & Sumitomo Metal Corp. (NSSMC) stands out, accounting for a spike in September. NSSMC wishes to replace its Capesize fleet with larger ships and ordered nine VLOCs from two yards in Japan.

China having been the largest producer of dry bulk ships in recent years has also experienced the most significant drop this year. Chinese yards have only signed contracts for 2.5m DWT of new dry bulk ships this year. In 2014, the full-year total was 34 million DWT.

“The dry bulk market has been in a slump in 2015 mainly due to a great imbalance between supply and demand. The demand for dry bulk commodities has slowed down during the year with coal taking the biggest hit.

Meanwhile on the supply side, owners have been reluctant to scrap their ships during the second half of the year at the same pace as during the first half of year, where we saw a new half-year record.

This has left the fleet at a level not corresponding with the diminishing demand. The unfavorable situation has driven the demand for dry bulk ships down and ultimately the price of newbuildings has followed suit”, adds Peter Sand. 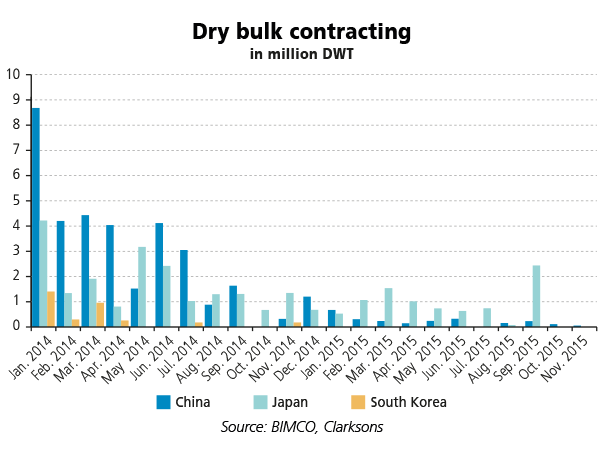