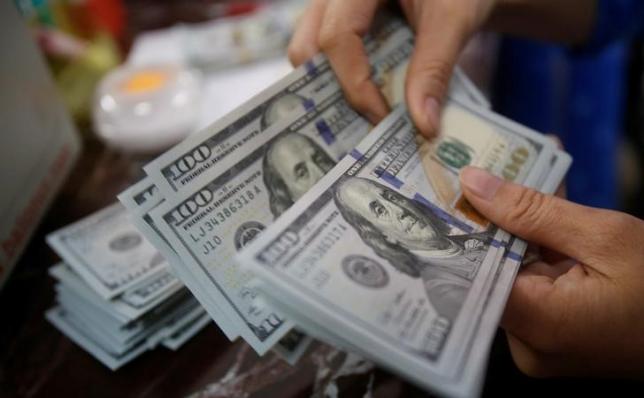 The U.S. dollar gained on Thursday as data pointed to solid U.S. growth, though the dollar index held under seven-week highs due to caution over how much Friday’s employment report for September will be impacted by recent hurricanes.

The U.S. trade deficit fell in August as exports of goods and services rose to the highest level in more than 2-1/2 years, while the number of Americans filing for unemployment benefits fell more than expected last week.

New orders for U.S.-made goods rose in August and orders for core capital goods were stronger than previously reported, suggesting robust business spending could help offset some of the economic drag of Hurricanes Harvey and Irma.

“There’s been positive data in the U.S. this morning, that’s been supportive of the dollar,” Sireen Harajli, foreign exchange strategist at Mizuho in New York, said.

The dollar index against a basket of six major currencies rose as high as 93.851, but held below the seven-week high of 93.92 reached on Tuesday as traders waited for Friday’s payrolls.

“There is a little bit of a sense of caution, markets are looking for a very low number,” Harajli said. “I think we will probably see a stronger reaction if we get a better-than-expected number because it will firm up expectations that the FOMC will go ahead and tighten policy in December and beyond.”

Improving U.S. data along with the prospect of U.S. tax cuts and the likelihood that the Federal Reserve will raise interest rates in December have boosted the U.S. currency in recent weeks.

Interest rate futures traders are now pricing in an 84 percent likelihood of a December rate hike, up from 78 percent a week ago, according to the CME Group’s FedWatch Tool.

ECB policymakers last month debated the trade-off between various options for extending its asset buying, with some arguing that a reduction was warranted in any scenario.

The single currency was last down 0.30 percent against the greenback at $1.1725.