West African and Latin American producers are sending ever-growing volumes of crude to China. America’s exports to the Asian country have slumped in favor of its neighbors. There’s an urgent global need to find replacement barrels for Iran’s, whose exports might just collapse next month. 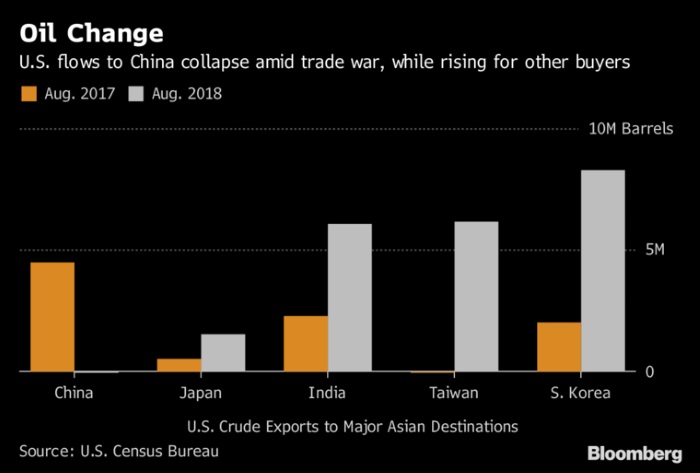 The thing that connects the shifting flows is Trump’s foreign policy. China’s slumping purchases of American crude — and its extra buying from elsewhere — have coincided with a trade war between the U.S. and the Asian country. Likewise, reimposed sanctions on Iran, which start Nov. 4, have increased the need for the type of heavy, sour crude that the Persian Gulf state sells.

“If you combine the impact of U.S. sanctions on Iran and the U.S. trade war with China, it is Trump’s foreign policy which is reshaping oil flows,” said Olivier Jakob, managing director of consultancy Petromatrix GmbH. “The U.S. is becoming a great energy power and they will use that, we are starting to see the implementation of that in different parts of the energy scene, part of that is being seen today in the oil flows.”

But there have been recent changes in precisely where those barrels are going. China, the world’s largest energy consumer, in August didn’t import any U.S. crude for the first time since September 2016, according to the most recent data from the U.S. Census Bureau. That compares with almost 12 million barrels in July, when China was the second-largest recipient.

Shipments to South Korea soared to a record 267,000 barrels a day in August — a 313 percent year-on-year increase, according to Bloomberg calculations from Census data. Volumes to Japan and India rose by 198 percent and 165 percent, respectively. Exports to the U.K., Italy and the Netherlands have also surged this year.

“The pattern of trade does look as though it’s going to ebb away from a focus on China to other Asian countries, and Europe,” said Caroline Bain, chief commodities economist at Capital Economics.

China is also increasingly turning to other regions. Colombian exports to the Asian nation rose fivefold in September, while Brazilian shipments hit their highest level this year. Chinese refiners bought 1.71 million barrels of crude a day from West Africa for October loading, the most since at least August 2011.

It’s not yet clear to what extent, if any, China will curb shipments of Iranian crude due to U.S. sanctions. However, buyers in India, Japan and South Korea are reducing purchases from the Persian Gulf state. Saudi Crown Prince Mohammed Bin Salman said that the kingdom and other OPEC producers are making up for lost supply from Iran.

The demand for replacement crudes is apparent. Exports from Oman last month rose to their highest levels this year on healthy demand from China, Bloomberg tanker-tracking showed. Kuwait is directing more flows to Asia, while its shipments to the U.S. by late September all but dried up — the first time that’s happened since the Gulf War of 1990-91.

The curbs on Iran are having an effect on oil prices, with global benchmark Brent trading now trading near its highest level in four years. Oman was the talk of one of the oil market’s biggest gatherings last month, as its crude surged past $90 a barrel. Supertankers, which often benefit when trade flows are dislocated, are earning the most since early 2017.

Flows from Iran could drop by 2 million barrels a day, to below 1 million barrels day in November and possibly December, Energy Aspects Ltd. said in a report dated Oct. 1.

Whether it’s the need he’s created for replacement supplies from Iran, or other actions by the U.S, president, Trump’s policies are now having a direct impact on where oil is flowing, said Eugene Lindell, an analyst at JBC Energy GmbH in Vienna.

“What you can say beyond doubt is that it’s creating lots of exotic trade flows that hadn’t been in the market before,” he said. “It’s been a major influence that has forced a change in trade flows.”