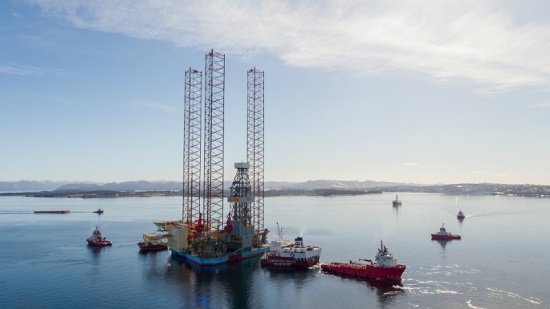 An offshore drilling rig hired by Norwegian oil and gas producer Aker BP is getting all its power from electricity produced onshore, the firm said on Thursday, in a move that cuts carbon emissions and could be a world first.

The Maersk Invincible rig, which is operating at the Valhall field in the North Sea, is connected with a 500-metre long cable to the field’s Valhall platform which is in turn powered by a 294-kilometre long subsea cable linked to Norway’s shore.

“To our knowledge, this is the first one,” said a company spokesman, citing data provided by the rig’s owner, Denmark’s Maersk, and other sources.

Some oil and gas platforms off Norway already receive some power from land, such as Statoil’s Troll A gas platform and Aker BP’s Valhall. Statoil’s giant Johan Sverdrup oilfield under development will also be powered from land.

But this is the first drilling rig to get all its power from land, rather than from gas turbines on board the rig.

Aker BP calculations show the Maersk Invincible, which will drill for oil and gas at the field, will reduce its annual carbon dioxide emissions by 15,200 tonnes and emissions of nitrogen oxide, another greenhouse gas, by 168 tonnes.

Electricity in Norway is 100 percent produced from renewables, mostly hydropower.

Aker BP has received 42 million crowns ($4.95 million) from a Norwegian fund to reduce emissions of nitrogen oxide. The spokesman declined to comment on the total cost of the project.

Maersk Invincible, a rig built in 2016 and able to drill in depths of up to 12,000 metres, is expected to plug a total of 18 wells in Valhall over the coming years.