Dry Bulk Shipping: Rates may have climbed out of the abyss, but challenges remain in place for the autumn BIMCO expects the fundamental market balance to deteriorate in 2019 which will do nothing to improve freight rates as the 2020 sulphur cap nears.

Earnings for Capesize vessels have continued their rollercoaster ride, reaching their highest level since the end of 2013, at USD 36,101 per day on 2 September 2019. Between 2 April, the low point of the year so far, and 2 September rates have risen 943%, into solid profit-making territory. 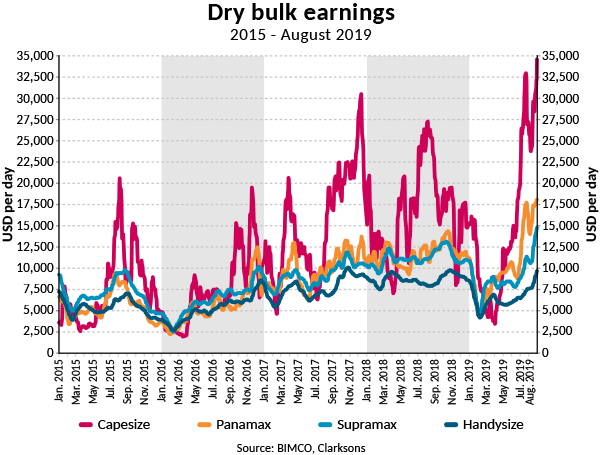 Earnings for the smaller dry bulk ship sizes have also risen since the start of the year. Panamax earnings reached their highest level in almost nine years, USD 18,116 per day on 2 September 2019. The last time Panamax earnings were above USD 17,000 per day was in December 2010. Panamax earnings have increased as these ships have entered trading on traditionally Capesize trades.

The strong increase in Capesize and Panamax earnings reflects a change in the market dynamics since the beginning of the year. Following major disruption at the start of the year, Brazilian iron ore exports have increased, although monthly exports since March remain lower than what they had been in the corresponding months last year. Iron ore exports bottomed out in April at 18.9 million tonnes and have since risen to 34.3 million tonnes in July. 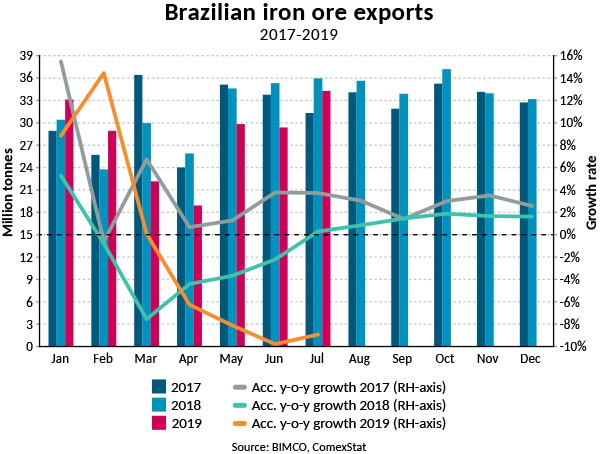 This sharp increase in volumes has resulted in more iron ore spot cargoes out of Brazil, which had been at zero for several weeks in April. The number of available spot cargoes increased through May and June reaching a high in July, during which 30 cargoes were made available over four weeks. Volumes have since fallen in August with between 2 and 5 cargoes being made available weekly in the first half of the month.

Major Chinese dry bulk imports paint a conflicting picture for the Capesize market, with iron ore imports down 4.9%, whereas coal imports are up 6.9%. BIMCO has previously reported on the changing nature of Chinese iron ore demand, driven primarily by a switch to using scrap steel in steel production rather than imported iron ore, a change pushed for by the Chinese government. Chinese steel production is up 9% this year, the growing volumes being produced mainly for domestic consumption, as exports have not increased.

The main Brazilian soya bean exporting season which due to seasonality occurs between March and July, disappointed. Despite a strong start to the year in January and February, exports in the first seven months of this year are down 5.9%. Although Brazil has had a record-breaking harvest this season, low stocks at the start of the season as well as lower Chinese demand due to the African swine flu, has meant that the record harvest has not driven record exports.

Deliveries of 25.6m DWT compared to demolitions of only 5.5m DWT has resulted in a net fleet growth of 2.4% so far this year, with the fleet currently standing at 865.3m DWT. Year-on-year Capesize fleet growth has been below 3% since February 2019 indicating that, for the moment at least, the supply side is under control. Solid scrapping has led to 22 Capesize vessels with a cargo carrying capacity of 4.2m tonnes, leaving the fleet since the start of the year. This has only partly countered the 43 Capesizes that have been delivered, including 8 Valemax (380,000 – 400,000 DWT) and 24 VLOCs (200,000 – 350,000 DWT).

BIMCO expects that the solid scrapping activity will slow down in the second half of the year. BIMCO expects that transported volumes will grow along usual seasonal patterns in Q3 and Q4, with Capesize earnings remaining profitable for the rest of the year. This does however depend on iron ore exports from Brazil and Australia remaining stable, and Chinese demand for iron ore not falling due to the increased use of scrap steel in steel production. Chinese coal imports must also maintain what has so far this year been a supportive role, and which could deliver volatility to an otherwise steady outlook.

Contracting activity has been slow over the summer months with 18 dry bulk vessels being ordered between June and August, consisting of 5 VLOCs, two standard Capesizes and 11 Handymax, of between 42,000 and 49,500 TEU. The total order book as of the start of September stood at 93.3m DWT.

The African swine flu outbreak has had a severe impact on the Chinese pig herd, with official statistics showing that 32% of China’s pig herd has been culled in the past 12 months, dramatically reducing demand for soya beans, in a trade that has already faced much disruption since the start of the trade war. The massive culling makes it even more unlikely that the trade will return to volumes previously seen any time soon, with Chinese soya bean imports in the first seven months of the year down by 11.3%. With the main Brazilian exporting season having drawn to a close, focus will turn to the US and what is expected to be another disappointing export season as China has announced that it will stop all purchases of US agricultural goods as well as adding a further 5% tariff to soya beans as part of the latest escalation of the trade war. Chinese coal imports, which so far this year are up 6.5%, are facing increasing domestic political influence. Reports of shipments of coal from some of the traditional coal exporters to China facing increased delays with customs clearance as well as some local customs areas limiting coal imports in 2019 to the same level as 2018, mean that this trade is an important swing factor in the rest of the year. In December 2018, Chinese coal imports were dramatically reduced when some customs areas stopped clearing coal to limit total imports. Should 2019 follow the same pattern as 2018, coal imports will gradually decrease on a monthly basis through to the end of the year, with several factors pointing to this possibility.

The political importance which the Chinese government has placed on keeping the growth of coal imports low comes from their hopes of becoming self-sufficient. The Chinese state has made several large investments in domestic coal production, leading to a recording breaking 333.4 million tonnes of coal being produced in June 2019, as supply grew to meet high energy demands over the summer. But as Chinese coal remains more expensive than imported coal, sudden changes in customs’ policy mean that this trade can quickly go from high growth rates to volumes plummeting.

BIMCO expects the fundamental market balance to deteriorate in 2019 which will do nothing to improve freight rates as the 2020 sulphur cap (and its extra costs) nears. Shipowners’ ability to pass these extra costs on to shippers will depend largely on the market conditions, and for as long as supply is larger than demand, passing on extra costs will be difficult.