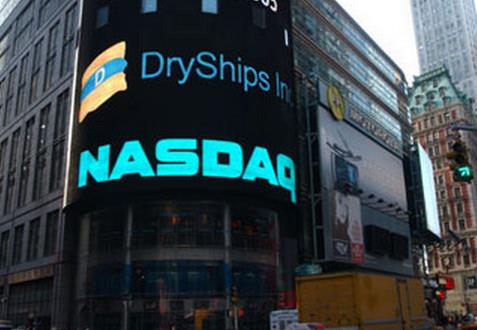 DryShips, a diversified owner of ocean going cargo vessels, announced the final results of its previously announced rights offering of shares of the Company’s common stock, par value $0.01 per share, which expired at 5:00 p.m., New York City time, on October 2, 2017.

The offering was fully financed and the Company raised $100.0 million of gross proceeds, including a $99.2 million investment by Sierra Investments Inc., an entity affiliated with the Company’s Chairman and Chief Executive Officer, Mr. George Economou, pursuant to a backstop commitment by Sierra.

The cash proceeds from the rights offering are expected to be used for general corporate purposes and/or vessel acquisitions and/or to repay amounts outstanding under the Company’s unsecured credit facility, as amended, with Sierra. Following the closing of the rights offering, the amount outstanding under the Sierra Credit Facility will be approximately $73.8 million and the facility is expected to be refinanced with a new secured loan facility with Sierra.

Additionally, following the closing of the rights offering, the total number of shares of Common Stock outstanding will be 104,274,708 and entities that may be deemed to be affiliated with the Company’s Chairman and Chief Executive Officer, Mr. George Economou, will beneficially own approximately 69.5% of the issued and outstanding Common Stock.

The rights offering was made pursuant to a registration statement on Form F-3 that was filed with the U.S. Securities and Exchange Commission and became effective on May 7, 2015. For questions about the rights offering, you may contact Advantage Proxy Inc., the information agent for the rights offering, toll-free at 877-870-8565 or if you are a bank of broker, 206-870-8565.

wow, so true, but I don’t know if we both realized it…. I totally fell for an aries by accident, and it seems like he’ll never leave my mind or heart!