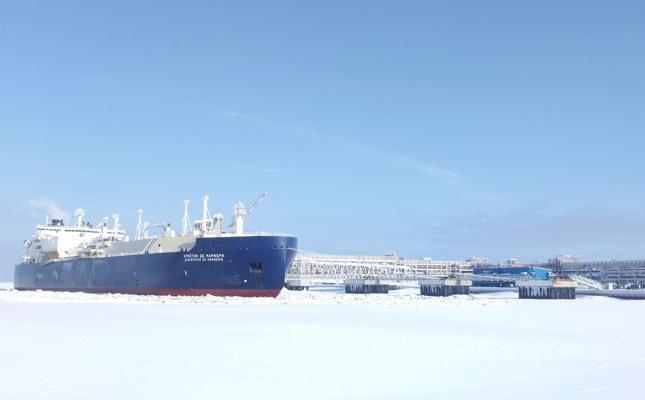 A new ice-breaking tanker capable of navigating the Arctic on its own is set to load its first liquefied natural gas (LNG) shipment from Russia’s fast-expanding Yamal facility.

The Georgiy Brusilov left South Korea’s Daewoo Shipbuilding and Marine Engineering shipyard at the weekend and is due at Yamal’s Sabetta port on Nov. 28, Refinitiv Eikon data shows.

It is the eighth ARC7-class LNG carrier, which are longer than the Titanic, to join the Yamal fleet operated by Teekay, Mitsui OSK Lines and Dynagas, with another seven expected.

The vessels have enabled Yamal’s operator Novatek to ramp up production since its first LNG cargo at the end of last year, with the northern Russian facility’s output only constrained by the number of carriers able to traverse the waters of the Arctic westwards without the help of icebreakers.

While the Arc7 carriers can ply the Northern Sea Route during the summer from northern Russia to Asia, during winter they go westwards and either deliver to northwest Europe or transfer LNG for onward journeys to Asia.

That has increased demand for ordinary tankers, which take the LNG from ports in the Netherlands, Britain or Belgium to Asia, a factor behind soaring LNG shipping rates.

Another of the tankers, the Boris Davydov, has been on sea trials around the South Korean island of Geoje since at least September and may also soon be ready for operation.

All but one of the ships ordered by Novatek are named after early 20th century Russian Arctic scientists and explorers. The Christopher de Margerie is named after the late head of oil major Total, which has a stake in Yamal.

Novatek hopes to bring a third train, or plant, at Yamal into operation by December, making it one of the largest LNG export facilities in the world with a capacity of 16.5 million tonnes a year (mtpa).

The continued ramp-up in output as the Northern Hemisphere winter approaches eases concerns over a supply crunch in both Asia and Europe as happened last year when below-average temperatures drove demand, and prices, up.

The following table shows the status of the Arc7 carriers ordered by Novatek for Yamal: