Paddy Rodgers, CEO of Euronav said: “Completion of the Gener8 merger during the second quarter of 2018 reflected a huge amount of work by Euronav and provides the Company with a market leading large tanker platform of over 70 vessels. Demand for and supply of crude oil remain resilient, boosted recently by a directional change from key OPEC participants and well supported by expansion in ton miles, elevated recycling activity and impending regulatory change.

However, the rebalancing of the tanker market requires further affirmative action in reducing primarily older tonnage, restraint from contracting and a supportive oil price structure. Euronav remains confident on the medium term prospects for the large tanker market and today we see some short term improvements in the supply of both crude and tankers.”

The average daily time charter equivalent rates (TCE, a non IFRS-measure) can be summarized as follows: 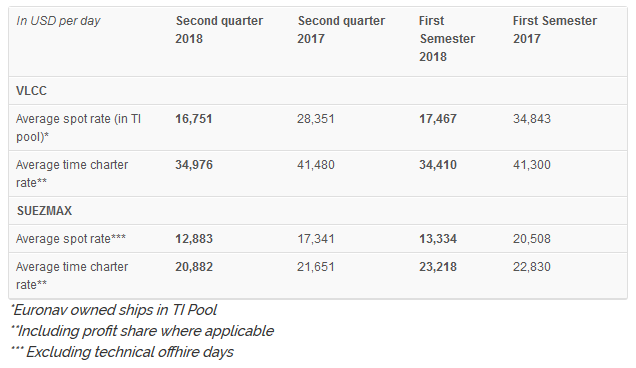 In line with our stated policy of a minimum fixed dividend, Euronav will pay an interim dividend of USD 0.06 per share for the first half of 2018. It is anticipated that the ex-dividend date shall be September 26, 2018 with a record date of September 27, 2018 and a payment date as of October 8, 2018. This equates to a cash payment to shareholders of USD 13.1 million on the enlarged number of shares following completion of the Gener8 Maritime merger in June.

Euronav took delivery of the third Suezmax the Cap Port Arthur (2018 – 156,600 dwt) on August 8, 2018 with the fourth and last vessel from Hyundai Heavy Industries due for delivery at the end of August. During the second quarter a total of 43.5 USD million was made in installment payments towards the construction of the two remaining Suezmax vessels at Hyundai Heavy Industries with an outstanding balance of 86.6 USD million at the end of the second quarter. These vessel orders are accompanied by four seven-year time charter contracts.

MERGER BETWEEN EURONAV AND GENER8 MARITIME

On June 11, 2018 Gener8’s shareholders approved the merger between the two companies. Upon closing the merger, Gener8 became a wholly-owned subsidiary of Euronav. Holders of 81% of the outstanding shares of Gener8 cast their vote, and of those 98% approved the merger.

The Combined Entity balance sheet assets of over USD 4 billion has marked-to-market leverage of less than 50% with the Company retaining around USD 758 million of liquidity as at the end of June 2018. The status of this transaction has been recognized with the Seatrade awards selecting the merger as its “Deal of the Year” for 2018 in June.

Recycling of primarily older tonnage during the first half of 2018 has caused modest net decrease of worldwide fleet for this period. The 41 VLCC equivalents (33 VLCCs and 16 Suezmaxes) removed from the global fleet in the six months to the end of June (source: Pareto) compares favorably with the 69 VLCC equivalents removed during the course of calendar year 1985 – the record year for recycling. Accompanying this trend, prices in both the VLCC and Suezmax sectors for new builds have been rising 9% and 7% respectively during the first semester (source: Clarkson’s).

An elevated recycling price, continued negative cash flow pressure on older tonnage from challenged freight rates, low utilization and growing pressure from incoming regulatory changes should provide support for further recycling in the second half and beyond. Further fleet rebalancing is however required before the freight market can make sustained progress as the new build delivery schedule remains concentrated particularly in the VLCC sector well into 2019.

Whilst recent proposals from OPEC to increase production are positive for the tanker market, they are caveated by volatile supply signals from Venezuela, Libya and Iran, primarily over how sanctions are imposed on them. Should sanction imposition be aggressive this could lead to 20-30 Iranian tankers being removed from the global trading fleet to be used for domestic floating storage which would provide a positive boost to the tanker market in the second half.

The IEA have largely kept demand growth forecasts static at 1.4 mbpd for calendar 2018 and recently introduced the same estimate for 2019. These resilient demand figures remain above the long term trend growth level (1.1 mbpd) despite a crude oil price remaining above USD 70 since the start of the second quarter of 2018.

Ton miles has supported this buoyant demand background particularly with U.S. crude exports which topped 3 mbpd in late June for the first time. Over the past 30 months, since the export ban was lifted, U.S. crude exports have risen 600% with potential for further expansion into 2019/20 as pipeline and port infrastructure are improved.

Further fleet rebalancing is required before this supportive background can be translated into improved freight rates on a sustainable basis. Restraint from contracting and a supportive oil price structure would also provide support against recent volatile signals from the crude oil market.