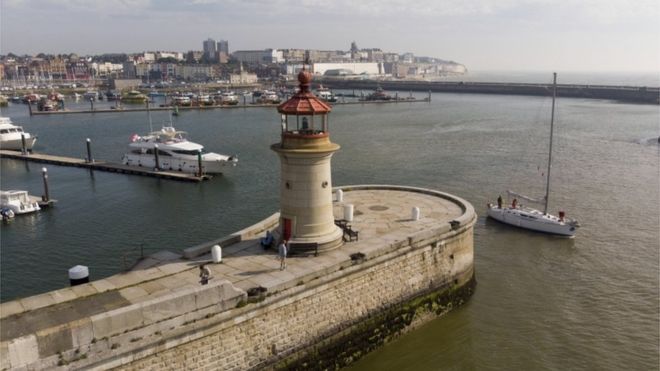 The UK government is facing a court challenge over the contracts it awarded to three shipping firms as part of its no-deal Brexit preparations.

Eurotunnel, which operates railway services between the UK and France, says the contracts were handed out in a “secretive” way.

The firm says it wasn’t given the chance to compete and wants the contracts quashed.

The case, which starts on Friday, is expected to conclude next week.

At the end of December, the Department for Transport (DfT) contracted three suppliers – Brittany Ferries, DFDS and Seaborne Freight – to provide additional freight capacity for lorries at ports other than Dover, in the event that a no-deal Brexit leads to congestion on roads down to the coast.

In documents outlining the agreements, the DfT stated that an “unforeseeable” situation of “extreme urgency” meant there was no time for the contracts to be put out to tender – the standard practice for public procurements.

One firm, Seaborne Freight, has already had its contract cancelled after the BBC found it had no ships and had never run a ferry service, and after one potential backer, Arklow Shipping, pulled out.

Transport Secretary Chris Grayling has been heavily criticised for the Seaborne deal, which would have been worth £13.8m.

In January, Eurotunnel wrote to Mr Grayling to complain that it had not been considered when the contracts were awarded.

It argues that unlike Seaborne, it has actually run a cross-Channel ferry service (MyFerryLink, which closed in 2015) and should have been approached.

The company also claims that the government had ample time to conduct a full and open procurement process, and that the Department for Transport could have foreseen a no-deal Brexit well before the end of last year.

Eurotunnel has previously voiced concerns more broadly about the potential impact of a no-deal Brexit on its business.

If the court finds in its favour, all three contracts, including those with Brittany Ferries and DFDS, could be ruled “ineffective”.

Andrew Dean, a director at law firm Clifford Chance, and a former government advisor, said that in such a scenario, “a critical part of the country’s no-deal Brexit preparations could be swept away just weeks before Brexit Day on 29 March”.

He added that “the government could face substantial civil fines and be forced to pay damages to Eurotunnel.”