Four groups expected to bid for Thessaloniki Port on Friday 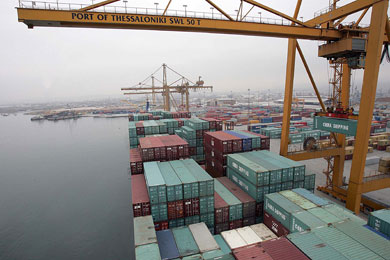 Four foreign investors are expected to bid for a majority stake in Greece’s Thessaloniki Port, on Friday, the offer deadline, the port’s top executive said on Wednesday.

The sale of a 67 percent stake in Greece’s second-largest port, which was launched in 2014, has been beset by delays and political resistance.

“Those four are still interested as we speak, there is information that all four will submit binding bids on Friday,” Mellios said, adding that Deutsche Invest had teamed up with French container shipping company CMA CGM.
Bids will be submitted by 1900 GMT to financial adviser Morgan Stanley and Greece’s privatisation agency would open the offers by April 7 at the latest, he said.

Thessaloniki port workers walked off the job for three hours on Wednesday to protest against the sale but Mellios said it would not affect operations.

Greece’s port workers union were expected to sign a new two-year labour contract with the port’s management on Thursday, Mellios said, giving them time to negotiate with the winning bidder, which will also operate the port for 40 years.
Thessaloniki Port has a market value of $211 million and had a throughput of 344,277 20-foot equivalent units (TEUs) last year.