G. Mouskas: Shipping and tourism can spur growth in Cyprus 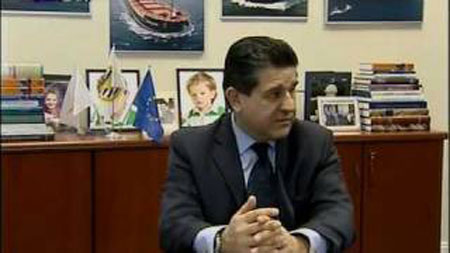 Shipping, along with tourism, are the two sectors where one can currently see growth potential in Cyprus after the severe blow to the islandâ€™s financial sector, according to the president of the Cyprus Union of Shipowners George Mouskas.

Speaking to CNA from his Zela Shipping companyâ€™s offices in northwest London, Mouskas said that it is important to convince more foreign ship-owners and especially Greek ones to adopt the Cypriot flag for their vessels. As he noted, Cyprus flag is cheaper that other countriesâ€™ while the government is very willing to do what it takes to make it even more attractive: â€œEven though the tonnage tax in Cyprus is very low, about half of Panamaâ€™s half of Maltaâ€™s, the government would definitely lower it; they want to attract people to the Cyprus flag.â€

Explaining the effect of the eurozone crisis on shipping, he pointed to the drop of European demand for goods produced in China, which has resulted to lower Chinese demand for raw materials and subsequently to fewer orders for cargo ships. Low freight rates make the situation even more challenging, added Mr Mouskas. â€œWe know it is going to change; itâ€™s been going on for a long time, itâ€™s been four and half years and it will possibly take another two years before we see an increase,â€ he predicted.

He also noted that the banking crisis has made ship financing more difficult, as banks lack liquidity. Regarding the recent developments in Cyprus he expressed concern that it may become more difficult for Cypriot companies to secure funding from cautious banks. He admitted that the longer the crisis goes on the more difficult it becomes. â€œBut as I said itâ€™s been four and a half years now, so the worst in shipping is over. Iâ€™m not saying the recovery is round the corner but I think the worst period has passed. Perhaps next year weâ€™ll see an improvement.â€

Despite the challenges, companies like Zela Shipping have been relatively unaffected. As Mr Mouskas pointed out, the current financial and banking situation in Cyprus hurts companies that work from the island, having established large staffed offices there, meaning they are most likely to be ship management firms. â€œMost of our members operating outside Cyprus are from Greece, 80% are from Greece. So they have the Cyprus flag but they donâ€™t operate in Cyprus, they operate out of Greece. They havenâ€™t been affected at all; they donâ€™t have any bank accounts in Cyprus, the services from the government have remained the same. In fact if anything they are trying harder to please people because they donâ€™t want to lose ships from the flag,â€ said the Cyprus Union of Shipowners president.

In a recent meeting with a member of the new government he was asked how ship-owners can contribute more to the Cypriot economy. â€œWe said all we can do is try to promote the flag even more, especially in Greece; and we must try and convince the Greek owners who have moved away from Greek flag [to use the Cypriot flag]. Donâ€™t forget out of 4,300 ships which are owned by Greeks only 750 are under Greek flag. The rest are foreign flag and very few of them are with Cyprus. Cyprus is cheaper than the other countries. It has this problem with the Turkish embargo which is a political problem but it doesnâ€™t affect every kind of ship, it affects tankers mainly I would say and some types of smaller vessels. But the bigger dry cargo ships and container ships are not really affected.â€ He expressed his â€œfrustrationâ€ with the fact that Greeks choose Malta in spite of the hard work in promoting the Cypriot flag in Greece.

According to George Mouskas, Cyprus can see some relief in the spiralling unemployment figures through shipping. â€œI think the management companies in Cyprus employ quite a few Cypriots already but if they can they must try and employ more. As far as weâ€™re concerned in terms of ship owning itâ€™s difficult to help in this respect because we can only employ sea farers and there are not many Cypriot sea farers. What we do is take cadets aboard our vessels who went to school to Greece, Cypriot cadets and weâ€™re taking one per vessel in order to train them as officers.â€

He described the losses inflicted on depositors in Cyprus as a shock. He warned that savers in other countries, such as Spain or Italy would cause a bank run should they see that their country is in need of help. â€œThey would withdraw all their money out before the negotiations even started,â€ he remarked. He added that the people mostly hurt by the measures in Cyprus are Cypriots and not Russians, who were thought to be the European partnersâ€™ target.

George Mouskas, also referred to his companyâ€™s history, with the celebration of 50 years of Zela Shipping to the day coming up on 16 April. An event in central London will mark the historic landmark and will see the launch of a book on the life of the late Kyriacos Mouskas (â€˜A Life Portrayal of Kyriacos Mouskasâ€™, Jonathan Lovett & Doros Partasides, Michaelangelo Publications), father of the current director and founder of Zela Shipping back in 1963. â€œIn 1955 he started working for a Greek owned shipping company in London, where he had come as a 19 year-old. The person he worked for, Voyazides, had promised him whenever he had opportunity he would help him buy him a ship of his own. In 1963 my father found this opportunity with a ship, the market was depressed and the price was very low. He managed to get loan from NatWest bank but they wanted a guarantee and thatâ€™s what his employer provided. He got the loan from the bank and thatâ€™s how Zela Shipping started, on 16th April 1963,â€ narrated Mouskas.

In the last 20 years Zela Shipping has turned to large open sea vessels and since then the company has grown much faster. From 2003 to 2008 it took advantage of the Chinese boom market due to sudden increase in Chinese demand for raw materials. â€œWhen we started the company we had one ship of 10,000 tonnes deadweight and today the fleet is 1.2 million tonnes, consisting of 7 ships. Going forward we are looking to modernise again and to try and buy perhaps another two new vessels now that the prices have gone down. But we are also starting a new venture with another Cypriot family, a very well known family, the Leventis group where weâ€™re buying vessels of 60,000 tonnes,â€ said Mouskas. The whole family are proud of what their business has achieved over 50 years, he added.

So, had his father ever regretted coming to the UK? â€œNo, I donâ€™t think he ever regretted coming here, no. He told me once that he nearly went back to Cyprus in the 40â€™s, he was considering going back, but in the end he decided to stay here and obviously it was the best thing for him.â€