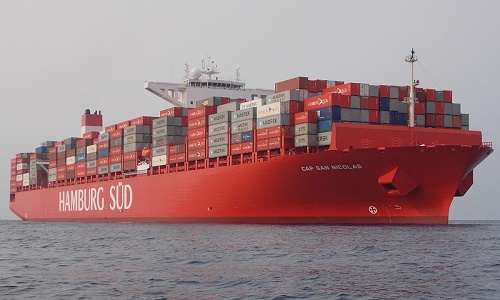 Germany, one of the world’s main maritime players, saw its commercial fleet shrink by a third over the past six years, becoming the biggest loser in a vicious industry slump that has reshaped global shipping.

Once the world’s predominant shipping lenders, most German banks have abandoned ship finance as they’ve written off tens of billions of nonperforming loans to cope with around $100 billion in toxic debt and sold scores of vessels to foreign owners at knockoff prices.

The contraction in German shipping stems from an unprecedented downturn over the past decade in which a glut of ships in the water, exacerbated by easy lending practices, pushed freight rates well below break-even levels.

Germany’s crumbled ship-finance structure is the most visible result of overleveraging in the business in the period leading up to the global financial crisis in 2008. Demand for ocean trade fell in the world-wide downturn, leaving some of the country’s biggest banks holding repossessed vessels because owners couldn’t pay back loans.

The grim picture also dealt a serious blow to investors, which included hundreds of thousands of German citizens—from dentists and engineers to small-business owners—that put their money into shipping with encouragement from local governments.

“Lack of ship financing and the inability to cover interest and principal payments have resulted in the massive sales of German vessels,” said Alfred Hartmann, president of the German Shipowners Association, known as the VDR.

Stricter regulation of European banks since the financial crisis has required that banks hold more equity capital than in the past. Large ship operators can still raise capital in places like China, London, New York and Oslo, “but smaller companies have a much harder time finding new investors,” Mr. Hartmann said.

VDR data show that German owners operate 2,400 vessels compared with 3,800 in 2012. In terms of gross tonnage the number is down by a quarter. The majority of ships went to cash-rich Greek owners, followed by Chinese and Singaporean operators.

“At its worst, there have been cases of five-year old ships that were sold as low as twice scrap price, or a 70% discount,” said Basil Karatzas, chief executive of New York-based Karatzas Marine Advisors, who has been involved in the sale of many German ships through an insolvency administrator.

For decades, German shipping money has been tied to so-called Kommanditgesellschaft funds, or KGs. Banks and asset managers hawked shares in the closed-end funds to private investors, and in the late 2000s, some 440,000 people became part owners of ships, according to German shipping law firm Kravets & Kravets.

They were lured in by favorable terms like full participation in the ship’s profits, with liability limited to the value of their shares. They also only paid a minimum flat tax to the federal government under a system designed to keep local companies competitive with owners in Asia.

Before the 2008 crisis, some 26% of new ship orders book came from Germany. Today that number has fallen to less than 2.3%, and hundreds of KGs have gone insolvent.

KGs need long-term charters that attract bank financing. But with market uncertainty and growing risks from trade wars, such contracts have become rare.

“When the market turned sour, the retail investors got burned and have zero interest in investing in shipping again,” Mr. Karatzas said. “The banks stopped lending money to the KGs and the whole edifice crumbled.”

The shipping crisis brought some banks to the verge of collapse.

HSH Nordbank became the world’s biggest ship financier in the 2000s when its balance sheet grew to more than €200 billion ($235 billion) as it aggressively expanded its shipping portfolio.

But after suffering massive losses and facing the threat of liquidation by European regulators, the bank was sold this year for €1 billion to a group of U.S. private-equity firms.

“This bank had to write off about 10 billion euros in shipping, and this will certainly never happen again,” said Stefan Ermissch, HSH’s chief executive.

The lender has cut its shipping exposure to €5 billion from a 2008 peak of $40 billion and now does shipping transactions only with a small number of German customers and select clients from Greece, Asia and the U.S.

Deutsche Bank , DB +0.00% Germany’s flagship lender, agreed In June to sell $1 billion worth of nonperforming shipping loans to U.S. investors Oak Hill Advisors and Varde. Deutsche’s shipping loans stood at €3.3 billion at the end of March, down from at €3.7 billion in 2017.

State controlled NordLB plans to be partially privatized and is marketing €2 billion in nonperforming loans, mostly from shipping, at a discount.

Others have abandoned shipping altogether. Commerzbank has slashed its ship portfolio of more than €20 billion in 2012 to €1.4 billion and has stopped giving out new loans.

“We expect the rundown of our ship financing portfolio will be finalized well before the original 2020 target,” a bank spokesman said.