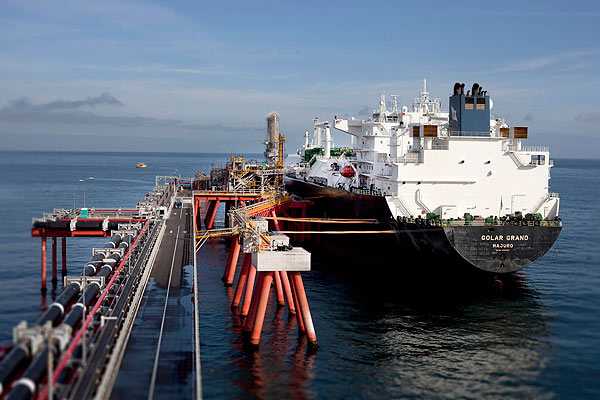 Golar LNG Partners LP reports net income attributable to unit holders of $14.8 million and operating income of $26.1 million for the first quarter of 2018.

· Generated distributable cash flow of $13.3 million1 for the first quarter with a distribution coverage ratio of 0.321.

· Secured a 15-year contract for one of the Partnership’s two available FSRUs.

· Declared an unchanged distribution for the first quarter of $0.5775 per unit.

As anticipated, total operating revenues decreased, from $90.1 million in the fourth quarter to $74.2 million in the first quarter. Three previously identified events contributed to the $15.9 million decrease. Firstly, the contractual seasonal downtime for the FSRU Golar Igloo resulted in 55 days off hire. Secondly, substantially lower rates and levels of utilization were achieved in the LNG carrier spot market by the Golar Maria and Golar Mazo, whose long term charters expired on November 30, 2017 and December 29, 2017, respectively. Lower levels of utilization on these vessels during the quarter also contributed to an increase in voyage costs. Thirdly, having concluded its sub-charter with Golar LNG Limited (“Golar”) on November 1, the LNG carrier Golar Grand traded for a full quarter at her reduced daily rate.

Repairs and maintenance carried out on the Golar Igloo during its scheduled seasonal downtime accounts for the $1.0 million increase in operating expenses from $15.4 million in 4Q to $16.4 million in 1Q.

Administrative expenses at $3.3 million were $2.2 million lower than 4Q. Reduced management fees and lower legal expenses account for the decrease, 4Q costs having been inflated by legal expenses in connection with structuring of the acquisition of an equity interest in the Hilli Episeyo (the “Hilli Acquisition”).

Depreciation and amortization at $25.6 million was $0.9 million lower than 4Q. Reduced dry-dock amortization in respect of the FSRUs Golar Freeze and Golar Spirit accounts for the decrease.

Interest expense at $20.3 million for the first quarter was higher than the fourth quarter at $18.4 million. An increase in LIBOR and the write off of deferred charges in connection with a vessel refinancing contributed to the $1.9 million increase.

A full quarter’s interest on the $177.0 million Hilli Episeyo pre-payment, inclusive of the $107 million from the put back of Golar Tundra, gave rise to a $0.4 million increase in interest income from $3.1 million to $3.5 million in 1Q.

Other financial items recorded a gain of $9.6 million for 1Q compared to a 4Q gain of $9.1 million. Further non-cash interest rate swap gains following an increase in 2-3 year swap rates account for much of the increase.

As a result of the foregoing, 1Q distributable cash flow1 fell a further $12.7 million to $13.3 million, compared to $26.0 million in the fourth quarter. As anticipated, the distribution coverage ratio1 decreased accordingly from 0.63 in 4Q to 0.32 in 1Q.

On January 19, 2018 the Partnership executed a 15-year charter with an energy and logistics company for the provision of an FSRU in the Atlantic Basin (the “Atlantic Project”). The capital element of the charter rate will vary according to demand for regasification throughput, but includes a cap and a floor that is expected to generate annual operating income before depreciation and amortization of between approximately $18 and $22 million. The charter, which includes a five year extension option, also includes an option after three years for the charterer to terminate the contract and seek an alternative regasification solution, but only in the event that certain throughput targets have not been met. Golar Partners will have a matching right to provide the alternative solution.

FSRU service is expected to commence during the fourth quarter of 2018 and a decision on which of the two available vessels will be selected is expected by the third quarter. Modification and dry-dock costs of $15 million can be expected in the event that the Golar Freeze is chosen whilst costs for the Golar Spirit would be in excess of this. Interest in smaller scale LNG projects represents grounds for optimism for contracting the remaining uncontracted FSRU, however this is likely to take some time.

Commissioning of gas treatment systems and refrigerant trains on board FLNG Hilli Episeyo continued throughout the quarter and first LNG was produced on March 12, 2018. Minor issues encountered after March 12, 2018 did, however, interrupt the commissioning of additional trains and the ramp up of production. By late April stable levels of production were being achieved and a 138,000cbm commissioning cargo destined for China was subsequently offloaded. Official acceptance testing has commenced and a second cargo has now been offloaded. Based on the current schedule, the contract is expected to fully commence in the coming days.

During June, Golar plans to draw down the final tranche of the vessel’s CSSC (Hong Kong) Shipping Co. Ltd. (“CSSCL”) debt facility. Concurrent with this drawdown, the short-term pre-delivery facility will be replaced by a long-term $960 million sale and leaseback facility. Both vessel acceptance and execution of the final sale and leaseback facility are conditions precedent to closing the Hilli Acquisition. Closing is expected to take place during June 2018. Equivalent to 50% of the two contracted liquefaction trains, out of a total of four, this initial interest includes a pro-rated 5% stake in any future distributions generated by the currently uncontracted expansion capacity, but does not include exposure to the oil linked component of the vessel’s earnings stream.

The purchase price for this initial interest was $658 million less 50% of the net lease obligations, equivalent to $480 million. After applying the $107 million Tundra Put sale proceeds and the $70 million deposit paid in August 2017, a balancing payment of approximately $1 million will be payable to Golar upon closing. Interest receivable from Golar on the $177 million prepayment will also cease upon closing.

Once again the fleet performed well during the quarter achieving 100% availability for scheduled operations. After accounting for the layup of the Golar Spirit, scheduled downtime of the Golar Igloo and idle time in the spot market for Golar Mazo and Golar Maria, utilization of 77% was recorded for the quarter.

There is no scheduled off hire expected in 2Q and utilization is expected to increase to around 85% as a result. The LNG carrier Methane Princess is scheduled to dry-dock in 3Q and this is expected to result in approximately 31 days off hire. Docking of the FSRU selected to service the Atlantic project is also expected to take place during 3Q. Additional off hire will not be incurred in this instance as both FSRU candidates are currently idle.

As of March 31, 2018, the Partnership had cash and cash equivalents of $142.6 million, restricted cash of $187.1 million and available and undrawn revolving credit facilities of $75.0 million. The Partnership’s total net debt3 as at March 31, 2018 was $1,084.5 million. Based on the above net debt3 amount and annualized4 first quarter 2018 Adjusted EBITDA2, Golar Partners’ net debt3 to Adjusted EBITDA2 ratio was 5.2. As of March 31, 2018, Golar Partners had interest rate swaps with a notional outstanding value of approximately $1,683.8 million (including swaps with a notional value of $400.0 million in connection with the Partnership’s bonds) representing approximately 132% of total debt and capital lease obligations net of long-term restricted cash. In anticipation of closing the Hilli Acquisition and the assumption of a proportionate share of its associated debt, the Partnership entered into a new $480 million 8-year interest rate swap commencing March 31, 2018. Upon closing, the proportion of debt swapped to a fixed rate is expected to revert to levels close to 100%.

The average fixed interest rate of swaps related to bank debt is approximately 2.1% with an average remaining period to maturity of approximately 5.3 years as of March 31, 2018.

During March, Golar Partners entered into an agreement to extend the maturity of the NR Satu debt facility. Originally due to mature in November 2019, this facility will now mature on the earlier of November 30, 2022 or charter expiry. The Partnership’s next debt maturity will now be in 2020.

During the quarter 617,969 common units and 12,548 General Partner units were issued under the Partnership’s ATM facility generating net proceeds of $13.9 million.

Corporate and Other Matters

June’s anticipated closing of the Hilli Acquisition represents a material step toward addressing the Partnership’s re-contracting risk. This transaction will add approximately $800 million of effective revenue backlog5 and further diversify Golar Partners’ asset and customer base. The 15-year Atlantic FSRU contract utilizing either Golar Spirit or Golar Freeze is expected to add a further $380 million of effective revenue backlog5. Progress toward securing a long-term contract for a converted FSRU that would utilize an LNG carrier further underscores the business case and active market for low cost, smaller scale FSRUs.

Current European and Asian LNG prices are more than 50% up on 2017 levels whilst US gas prices are lower. This dynamic creates a solid basis for long distance LNG exports. Together with the ramp up of US and Australian LNG production capacity, an increase in ton miles is expected to result in a stronger market for LNG carriers.

Aided by a full quarter’s contribution from the Golar Igloo, distribution coverage for the second quarter is expected to improve. Despite the scheduled dry-docking of a carrier and a reduction in interest income, coverage should improve further in 3Q as a result of the contribution to results from the Hilli Acquisition. Contingent upon sustained improvements in the LNG carrier market and prompt start-up of the Atlantic Project, further improvements are expected in 4Q 2018.

Although the distribution coverage ratio is unlikely to exceed 1.0 for the remainder of 2018, coverage levels in the run up to this transition phase were kept deliberately high in anticipation of this. The Partnership has $218 million of cash and undrawn credit facilities available to invest in growth opportunities and to pay quarterly distributions. Sustainability of the current distribution will be contingent on a number of events including deployment of part of the solid cash position into an attractive long-term investment opportunity, the timely closing of the Hilli Episeyo dropdown and commencement of the Atlantic FSRU charter, conclusion of a FSRU contract under discussion for the redeployment of a converted LNG carrier, charter status and anticipated earnings from FSRU Golar Igloo post 1Q 2019, and development of the shipping market. Golar Partners will also seek to stretch its debt amortization profile to better match the economic life of its assets. The Board will evaluate the optimum long-term distribution level based on developments of these key events over the next two quarters.