23 Nov 2016
by ShippingHerald Headlines, In Depth, Metals, The Wire Goldman Sachs Group Inc. said investors should bet on higher commodities prices in the next year as manufacturing picks up around the world, the first time the bank has recommended an overweight position for the asset class in more than four years.

Purchasing managers’ indexes strengthened in all major regions in October, helping to spur gains in iron ore, copper and other base metals. Goldman raised its iron ore price forecasts, citing an unexpected resilience in steel usage and a demand boost coming from broad restocking, as well as its oil price estimates into next year. “The recent re-acceleration in global PMIs suggests commodity markets are entering a cyclically stronger environment,” Goldman analysts led by Jeff Currie wrote in a report e-mailed Monday. “Supply restrictions from policy actions should benefit oil, coking coal and nickel in the near term while economic reductions should boost natural gas and zinc.”

Goldman Sachs is the biggest commodities dealer on Wall Street by sales and for that reason the views of its analysts carry extra weight among natural resources investors.

The bank raised its outlook for returns on the Standard & Poor’s GSCI Enhanced commodity index to 9 percent on a three-month basis, compared with a previous expectation for a decline of 2 percent. It also forecasts returns of 11 percent and 6 percent on a six-month and 12-month basis, respectively.

Industrial metals have rallied 14 percent in London in the past month on expectations that the economy in top user China is stabilizing and a Donald Trump presidency in the U.S. will bolster demand. Credit-fueled stimulus in China this year has been the primary driver of recent gains, rather than speculation surrounding the size of Trump’s infrastructure-investment plan, Goldman said. 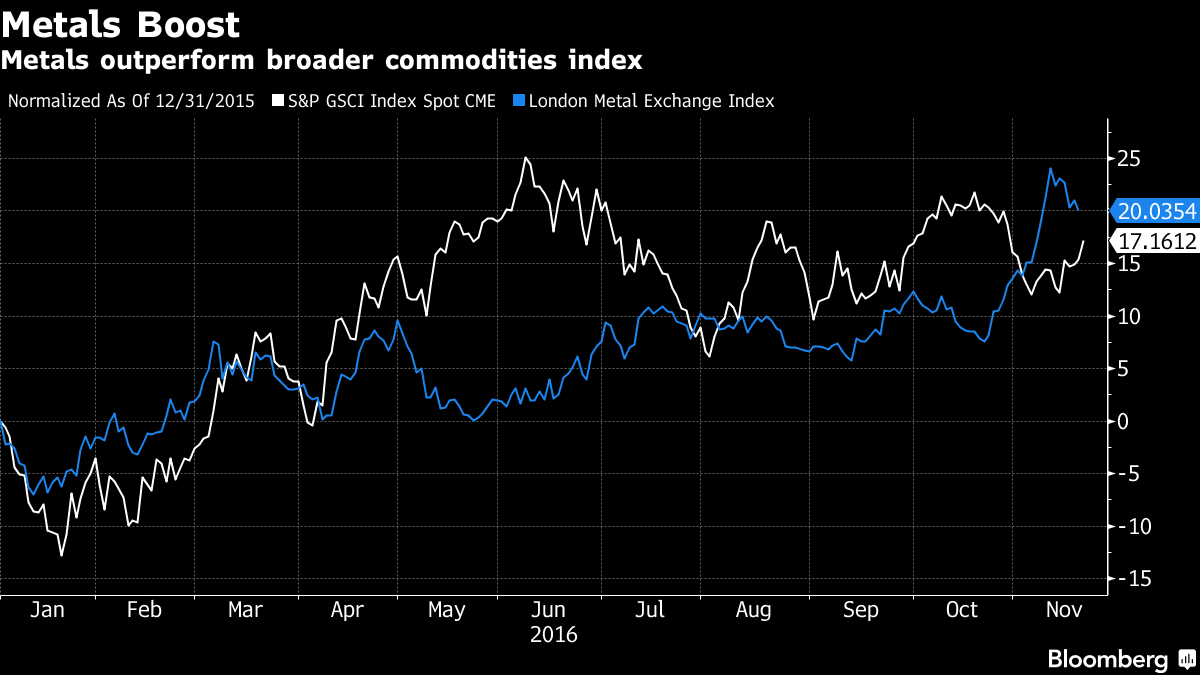 “It is tempting to blame the sharp post-election rally in industrial metals prices on President-elect Trump’s platform of lower taxation and higher public spending on infrastructure,” the analysts said. “We would argue this rally was a continuation of a reflation trend put in place at the start of 2016 by the Chinese through credit stimulus aimed at infrastructure projects and policy driven supply curtailments in coal.”

Goldman also raised its forecast for West Texas Intermediate crude-oil prices to $55 a barrel in both the first and second quarters of next year, compared with $46.63 now. It sees iron ore at $65 a dry ton in three months, and $63 and $55 in six and 12 months, respectively. The material traded at $70.34 today.

The bank cut its gold outlook to $1,200 an ounce on both a three- and six-month outlook. Prices slumped 5 percent in the past two weeks to $1,215.59 as the market sees a U.S. interest-rate increase next month as a near-certainty.