Greek port workers will hold a strike on Friday to protest the planned privatization of the Piraeus and Thessaloniki port authorities.

The nationwide federation of port employees (OMYLE) and the union of employees at the port authority of Piraeus said they will hold a demonstration and march in Athens on the same day.

Port workers oppose the government’s intention to hold what they described as a fire sale of the country’s ports through the country’s privatization fund (TAIPED) and accused it of going back on its promises. 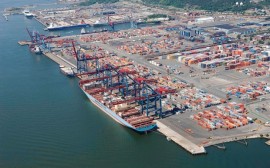