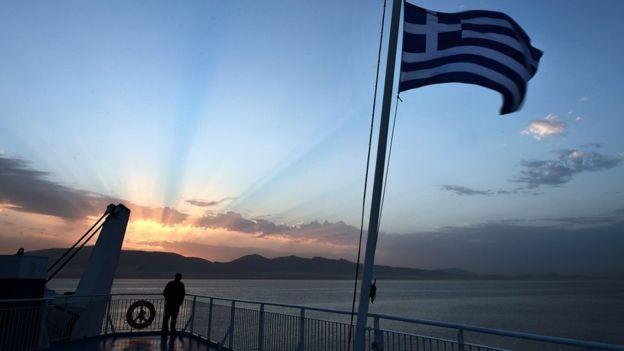 On 6 April 1941, Piraeus, one of the main harbours in Greece, was hit in a German bombing raid. According to Laird Archer, an American aid worker, â€œnothing in all the sound effects of catastrophe in Hollywood films could match the crashing thunderâ€.

The port was totally destroyed. But after the war, as Greece looked to the shipping industry to rebuild its economy it was soon transformed by the countryâ€™s tycoons into a global shipping centre and commercial hub for the Mediterranean

The Greek shipping fleet has since become the biggest in the world, with almost 4,000 ships representing 19% of global shipping capacity. It contributes more than 7% towards the struggling economy, but the countryâ€™s creditors say it can do more.

The industry currently pays no tax on international earnings brought into the country under rules incorporated into Greeceâ€™s constitution in 1967.

But since July, when the government proposed to increase shipping taxes and to end other privileges due to pressure from the EU and other international creditors, ship owners have been threatening to move their businesses abroad.

Shipping has been in Stavros Tsolakisâ€™ family for four generations. His great grandfather began the business by trading wood and olives from Mount Athos to Thessaloniki.

He himself is a professor of maritime economics, specializing in the management of ocean-going ships, and says the EU has no right to make such demands.

â€œJuncker (President of the European Commission, Jean-Claude Juncker) is a hypocrite because Luxembourg offers international ship owners the same tax benefits that the Greek government offers to Greek ship owners â€“ in order to convince them to move to Luxembourg, a landlocked country far away from sea.

â€œThe laws here are in line with international tax laws that exist in most maritime centres in all parts of the world. German and Dutch ship owners enjoy even stronger tax benefits than their Greek counterparts,â€ he says.

Other ship owners suggest that they are being encouraged by the EU to leave the country, purely so that the German shipping industry can become more competitive.

Though the majority of the worldâ€™s shipping is registered â€œoffshoreâ€, in places like Panama and Liberia, Greece is unique for being a small country with a large, locally owned shipping fleet under its own flag.

It also has a prominent â€“ and highly politicised â€“ shipping elite, and observers say that the EU has long wanted Greece to subject this shipping elite to a normal business tax system.

Prof Tsolakis believes that if the reforms are implemented there will be a huge exodus. And it is not only the industry that will lose out.

â€œWe mustnâ€™t forget the philanthropists of this industry. Ship owners fund a lot, contributing to the arts, culture, education, health and social welfare. The majority of state ambulances are likely funded by that money,â€ he says.

â€œIt is not only ship owners that benefit from shipping in Greece, but a plethora of occupations like shipbrokers, insurance brokers, bankers, ship suppliers, seafarers, ship repairers, ship agents and academics.â€

However, shipping business consultant George Xiradakis, is not so convinced that Greek ship owners are ready to leave their country.

â€œItâ€™s true. Every company has a plan B,â€ he explains. â€œBut really I think itâ€™s just to calm the shareholders. It makes sense to be prepared should taxes rise to such an extent.â€

Among the measures, tonnage tax for ships with Greek and foreign flags will increase by 4% annually until 2020, though considering that ship owners already volunteer â‚¬420m (Â£310m, $470m) in donations to the government, most in the industry seem unfazed by this rise.

â€œThere are plenty of ship owners, especially small shipping companies, who are using Greek banks for their transactions. Like me, they faced great difficulties and many vessels were stopped â€“ they couldnâ€™t withdraw anything and crew, bunkers and provisions couldnâ€™t be paid.

â€œSuppliers still canâ€™t import goods and spares, necessary for the system to function.â€

Consequently, some ship owners, unsure of what the future may bring, have already begun organizing arrangements to move abroad to places such as Cyprus.

After seven months of political and economic instability with fears of a Grexit polarizing society, Greeks last month re-elected the left wing Syriza party in a coalition with the populist anti-austerity Independent Greeks (ANEL). It was Greeceâ€™s second general election this year.

Syriza says it is finally being given the chance to govern properly alongside ANEL after months of being preoccupied with debt negotiations. But having now signed a third bailout deal, the government will face tough choices in how it implements cuts and austerity.

Shipping Minister Thodoris Dritsas has stressed the industry is crucial to the rebuilding of the economy, but that â€œthe greater the social benefit of the shipping activity, the more the competitiveness will be boosted and not the opposite way round, as claimed.â€

Mr Xiradakis doesnâ€™t believe the government will be â€œbrave enoughâ€ to attempt to change the constitution.

â€œThat doesnâ€™t mean we are not scared though. Of course we are.â€

Prof Tsolakis becomes nostalgic as he reminisces about business trips he would make five years ago: â€œI used to be proud to say I came from Greece. Now people look at me strangely and it doesnâ€™t feel good.

â€œWe used to be able to look after each other, but now weâ€™re losing our dignity. Iâ€™m pro-European but with austerity there must be development, we need hope.â€

Yet as social pressures mount, Syrizaâ€™s slogan in the January elections this year of â€œhope begins todayâ€ seems long gone.

The privileged tax status of the shipping industry is under increasing scrutiny, as the Prime Minister Alexis Tsipras, looks to boost government revenues and make cuts wherever he can.