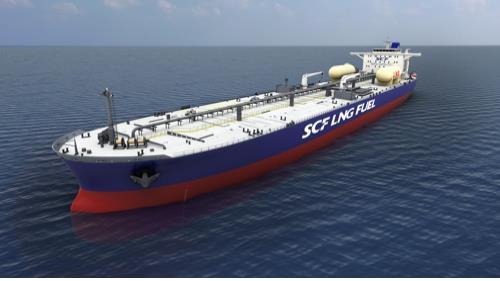 The four vessels ordered by state-run Russian shipping company Sovcomflot will displace 114,000 deadweight tons each and be highly eco-friendly, the shipbuilder said. It said the entire order for the midsize Aframax crude tankers is worth around US$240 million.

The tankers will be the first large vessels in the world to run on LNG and have been jointly developed by Sovcomflot and Anglo-Dutch multinational oil and gas company Shell to reduce greenhouse gases, such as nitrogen oxide and carbon dioxide, cited for causing global warming. The ships will be used by Shell to transport Russian crude oil.

The shipyard based in Ulsan, 414 kilometers southeast of Seoul, said the ships will be built by its affiliate Hyundai Samho Heavy Industries Co. that specializes in making tankers.

The first ship is expected to be delivered to Sovcomflot in the third quarter of 2018, with the last in the first quarter of the following year.

It also said that the latest deal came with an option for more orders and highlighted the company’s ability to make “green” ships.

Hyundai Heavy said that the tankers are more expensive to build than conventional ships of this size but have been designed from the outset to be more economical to run and release less greenhouse gases.

“There is a global trend to make ships more environmentally friendly so if the Hyundai ships are successful, this can potentially lead to a rise in orders down the road,” a local shipbuilding industry source said.

Hyundai Heavy, meanwhile, said that the latest order was helped by it moving to create a joint company with Russia’s Far Eastern Shipbuilding and Ship Repair Center. The tie-up being pursed calls for joint projects in the designing of commercial vessels and shipbuilding support.