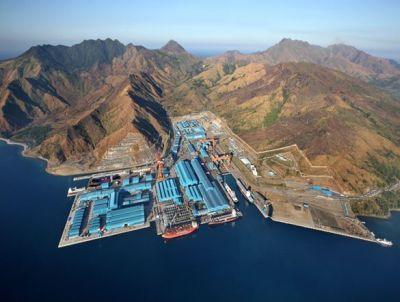 True Friend Korea Investment & Securities analyst Lee Kyung-Ja said the biggest issue facing shipbuilders was whether newbuilding prices would go up. She said, “For the HHI group, the 2018 order receipts are forecast to reach USD14.8 billion, up 45.6% year on year.”

HHI has an estimated global market share of 17%, giving it the most clout when buying raw materials and contract negotiations.

Lee noted that HHI’s Ulsan yard had secured 18 months of work, fuelling the possibility that newbuilding prices would go up.

She said, “Although insufficient, HHI was able to emerge from a trough and secure commercial ship orders worth USD4.7 billion in 2017. HHI’s separate orders should be driven by LNG carriers and large container ships in 2018. China has been tightening environmental regulations since 2017 and this is shaking up the global LNG arena.”

Like many of its peers, HHI had to sell non-core assets and cut costs as orders declined from 2014 to 2016.

HHI, which temporarily shut its secondary yard in Gunsan in July 2017, could consider reviving the facility if at least 70 orders are won this year.

The closure of the Gunsan yard did not go down well with politicians, especially officials of North Jeolla province where the facility is based. HHI’s main yard is in Ulsan.

HHIC, which has diverted construction of commercial ships to its yard in Subic Bay in the Philippines, said this was because of rising prices of raw materials.

HHIC entered an autonomous restructuring agreement in April 2016 with its main creditor, Korea Development Bank, after incurring debt of more than USD1 billion.

Initially, HHIC planned to sell its power generation subsidiaries, Daeryun E&S Co, Daeryun Power Co, and Byeollae Energy Co. However, banking sources said HHIC had a change of heart and, given its changing circumstances, the group now plans to submit a new liquidity-raising proposal to its creditors.

HHIC is nevertheless optimistic about a market recovery and is seeking funds to expand its Subic Bay facility.