24 Feb 2016
by ShippingHerald Headlines, In Depth, Metals, The Wire The surge pushing iron ore prices back above $50 a metric ton has failed to shake BHP Billiton Ltd.’s view that prices will stay low as supplies swamp the market and China’s slowdown hurts demand.

BHP warned Tuesday that weaker prices and higher volatility across commodity markets — including iron ore — will probably persist. The steel-making ingredient jumped 18 percent this year to $51.60 a dry ton on Tuesday, after a slump in the final three months of 2015 that pushed prices to the lowest level in more than six years, according to Metal Bulletin Ltd. 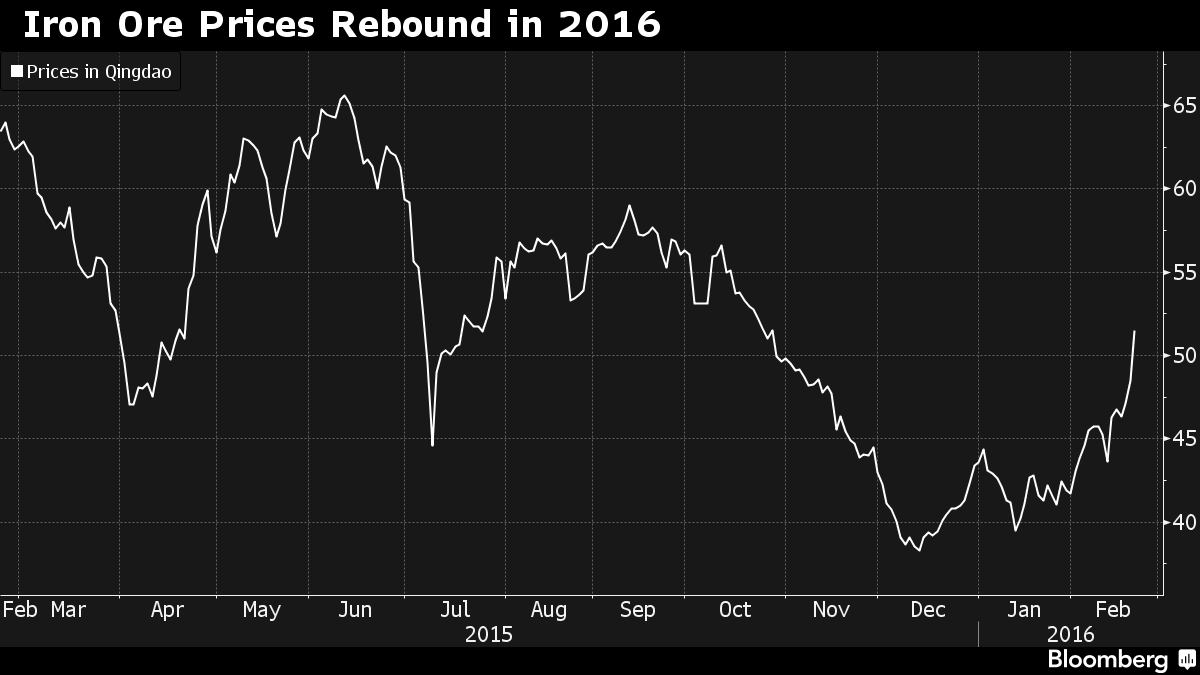 The “price will likely remain low, constrained by weak demand and abundant seaborne iron ore supply,” the world’s largest mining company said as it announced the first dividend cut in 15 years amid tumbling profits. “Chinese steel demand is expected to remain soft, with modest potential improvement if construction and infrastructure activity ramp-up in the first half.” The miner also said it would continue to target higher production in Australia.

The recovery follows a 39 percent plunge in 2015, when surging output from the largest miners including BHP, Rio Tinto Group and Vale SA spurred a glut amid shrinking steel demand in China. In 2016, prices have advanced as Chinese mills ramped up steel production after February’s Lunar New Year break and mainland miners scaled back, lessening competition for seaborne ore. Futures in Dalian have climbed to the highest since October.

“We have seen significant Chinese exits as well as other suppliers from the ‘non-conventional’ exporting countries,” Paul Gait, senior analyst at Sanford C. Bernstein Ltd. in London, said in an e-mailed response to questions on Monday. “At the same time we have seen a few weather and technical issues impacting the ability of the supply side to deliver the forecast tons.”

Prices have rallied due to an easing in the pace of exports from top suppliers. Shipments from Australia’s Port Hedland, the largest bulk-export terminal which handles cargoes for BHP as well as Fortescue Metals Group Ltd., fell 10 percent in January from December. In Brazil, Vale said it shipped less in the fourth quarter than the preceding period. BHP and Vale also lost output from a joint venture, Samarco Mineracao SA, after a dam burst in November.

Even as prices stay weak, BHP will still target higher output in Western Australia, Chief Executive Officer Andrew Mackenzie told investors Tuesday. The third-largest supplier expects to produce 270 million tons in Australia in the year to June 30, including tons attributable to joint venture partners, and continues to see an increase over time to 290 million tons, he said.

Raising supply helps lower costs as BHP increases volumes carried through its network of mines to railroads and ports, Mackenzie said. “It’s by and large free volumes, because they come for almost no cost and dilute our unit costs,” he said. BHP’s cash cost per ton fell to $15.21 in the second half of 2015 from $20.35 a year earlier, the company said.