Iron ore’s revival in 2016 has prompted mine restarts in Brazil, West Africa, Australia and China, adding to global supplies and potentially contributing to a weakening of prices into next year, according to UBS Group AG.

“Supply that had left the market is returning,” analysts including Daniel Morgan said in a July 25 report that also flagged increased output from Australian billionaire Gina Rinehart’s new Roy Hill mine in the Pilbara. “Ongoing supply growth and falling demand should weigh on the market further in 2017 at a time of rising energy costs, which will see margins compress.”

Iron ore has rallied 33 percent in 2016 as China’s steel demand and production proved more resilient than expected. The rebound after three years of declining prices has both resuscitated profits for the world’s largest suppliers including Rio Tinto Group, BHP Billiton Ltd. and Vale SA and enabled higher-cost producers to restart some operations.

“We expect prices to ease through the second half of 2016 as normal seasonal weakness weighs on the market even as underlying demand is better,” the analysts wrote. Next year, a forecast price of $47 a ton, “will enlarge industry losses and provide the necessary signal to supply to exit to rebalance against weaker demand.”

Ore with 62 percent content delivered to Qingdao rose 2.1 percent to $58.08 a dry ton on Tuesday, according to Metal Bulletin Ltd. Prices rallied 23 percent in the first three months of the year and gained a further 3.6 percent through June to cap the first back-to-back quarterly rise since 2013.

Iron ore’s ascent has prompted several banks to forecast a retracement toward the year-end. Macquarie Group Ltd. warned this month that recent advances may be well beyond fundamentals, saying there was abundant supply, rising inventories at China’s ports and prospects for weaker steel production.

The ramp up at Roy Hill appears to be gathering steam, with export rates at an annualized 24 million tons a year through May and June, according to the UBS report, which described the development as a “bearish risk.” The mine has said it’s targeting an annual production rate of 55 million tons. 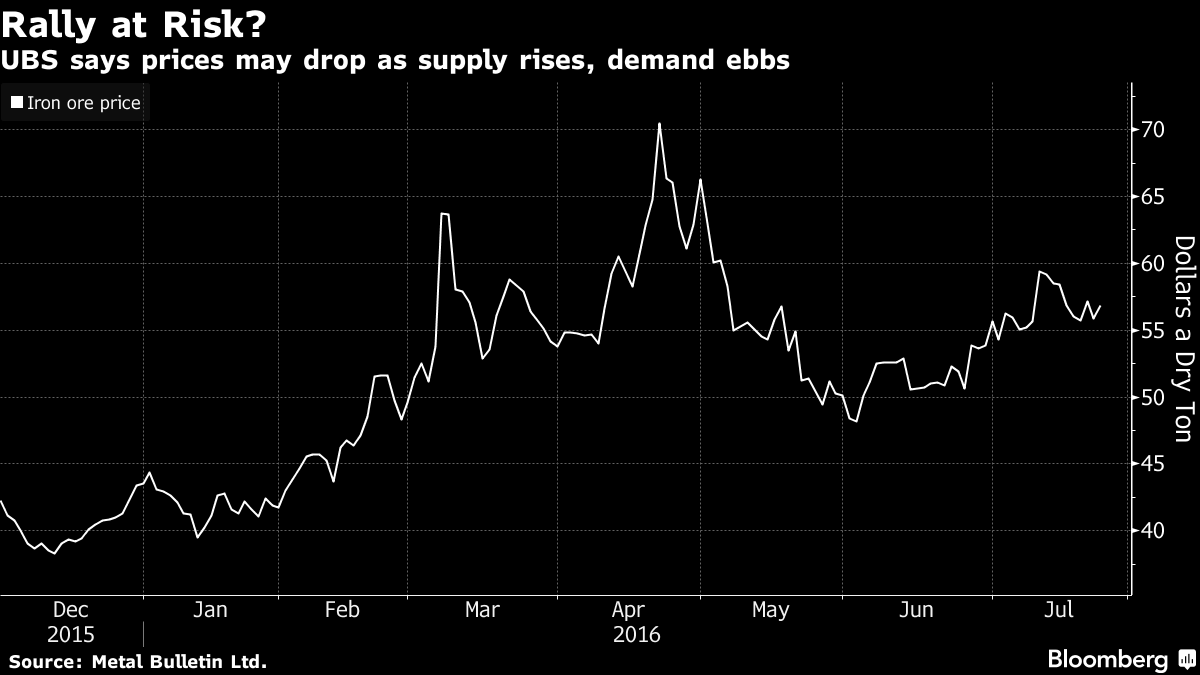