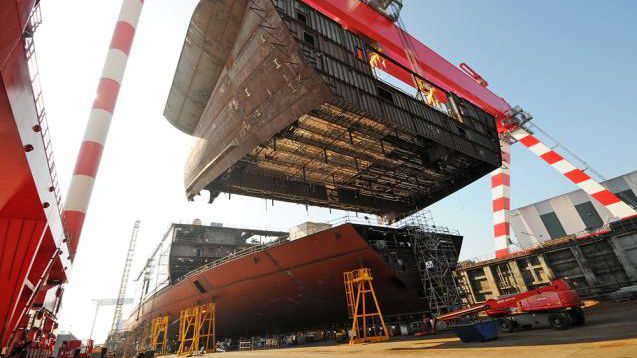 Italian shipbuilder Fincantieri said it had bought a 50 percent share in STX shipyards from France, in a deal expected to broaden an alliance between the naval industries of the two nations.

The deal, which values the stake at 59.7 million euros, ends a long dispute that strained relations between France and Italy.

French President Emmanuel Macron angered Rome in the summer by ordering a “temporary” nationalisation of STX, based in Saint-Nazaire in western France, cancelling a deal in which Fincantieri and another Italian investor had agreed to buy 55 percent.

Fincantieri said in a statement that the latest deal “represents an important first step towards the creation of a future alliance in both cruise and military naval sectors.”

Paris and Rome are exploring the creation of a Franco-Italian naval group, merging French military shipyards firm Naval Group with Fincantieri, a bid to ward off the threat from industrial powers such as China and the United States.

Fincantieri had 4.4 billion euros in revenue in 2016, and expects it to grow at least 16 percent every two years, up to 2020. Smaller STX France is the only one big enough in France to build aircraft carriers and other large warships.

Industry Minister Carlo Calenda said on Thursday that Italian Leonardo, which supplies land and naval defence electronics and is one of the world’s 10 biggest players in the defence industry, would be part of the talks.

State-controlled Fincantieri made a bid for STX France, which specialises in building cruise ships, after the demise of South Korea’s STX shipbuilding group.

Under the terms of the agreement, the French state will hold 34.34 percent of STX, Naval Group 10 percent, STX employees up to 2.4 percent and local suppliers up to 3.26 percent.

In order for Fincantieri to take effective control, the French state will lend the group a 1 percent stake. Fincantieri will nominate four members of STX’s eight person board.