Keppel Corp., the world’s largest builder of oil rigs, posted a 48 percent drop in second-quarter profit as oversupply led to delivery delays for offshore projects, and said it doesn’t expect demand for rigs to return soon.

With crude prices down more than 50 percent in the past two years, oil companies have cut spending and rig operators face rising debt, causing them to ask shipyards to cancel or delay deliveries of offshore drilling rigs and production facilities. Keppel, which gets about half its profit from building rigs, also has been hit by non-payment by one of its biggest clients, Sete Brasil Participacoes SA, which filed for bankruptcy protection in April.

“Given the oversupply in the rig market and falling day rates, we do not expect demand for drilling rigs to return soon,” the company said in a statement. “The offshore and marine sector continues to face serious challenges.”

Keppel declined 0.4 percent to close at S$5.58 in Singapore trading before the earnings announcement. The stock has dropped 14 percent in 2016, after falling for the past two years.

The company said it is taking steps to manage costs and “rightsize” its operations. Keppel Offshore cut its staff strength in Singapore and overseas by 4,900, or about 16 percent, while its subcontract headcount in the city-state was reduced by another 670 persons. 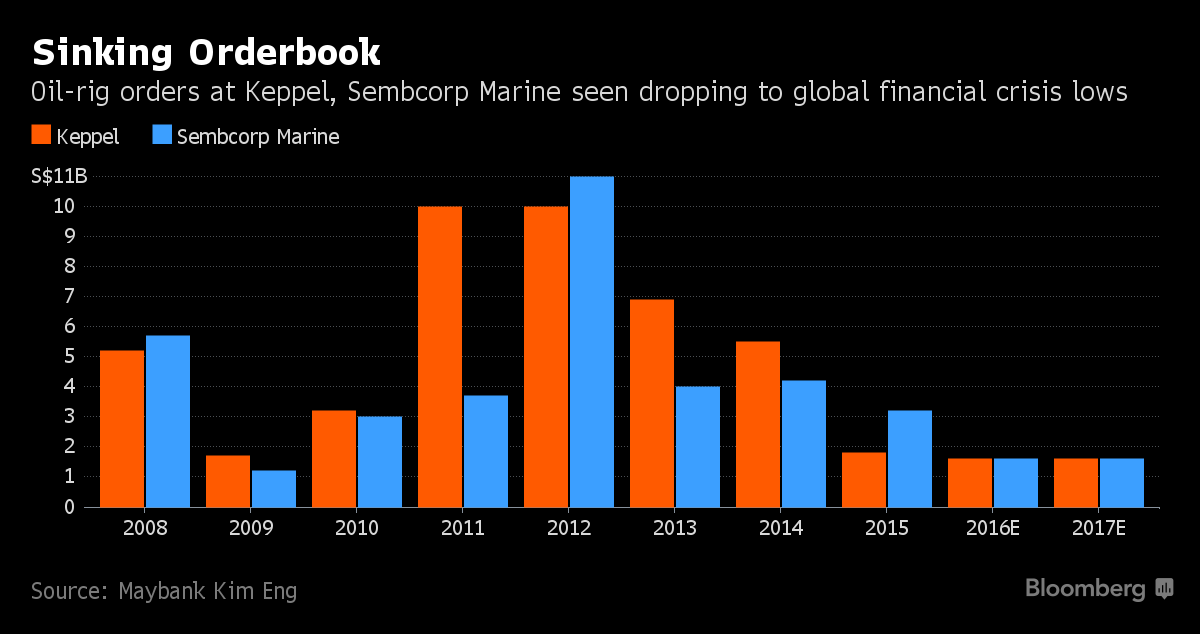 Sete Brasil accounts for a combined $10.5 billion in orders for semi-submersibles and drill ships at Keppel and smaller rival Sembcorp Marine Ltd. The Brazilian company fell into financial difficulty after it was unable to secure long-term financing and its only client, state-run oil producer Petroleo Brasileiro SA, faced allegations of kickbacks.

Keppel wrote off S$230 million in the fourth quarter of last year over delinquent projects. The company has said it stopped construction work for Sete Brasil and won’t resume until payment commences.

The company said the provision of S$230 million “????remains appropriate and adequate.” The Sete projects remain legally valid and Keppel will work with the Brazilian company to achieve a “a win-win outcome.”

Sete Brasil was created in 2011 to supply oil rigs to state-owned Petroleo Brasileiro, known as Petrobras. As the oil producer became engulfed in Brazil’s biggest corruption case and crude prices collapsed, Petrobras cut the number of rigs it planned to lease from Sete Brasil, according to two people familiar with the matter in April. The same month, Sete Brasil shareholders approved a plan to file for bankruptcy.