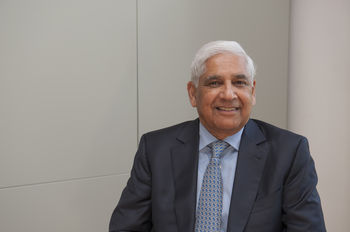 North P&I Club will provide full support to its shipowner members and the shipping industry to help deal with the challenges and opportunities faced during the coming years, says chairman Pratap Shirke. His comments were published (16 August 2016) in the Club’s 2016 Management Report.

‘During what has been another difficult year for the shipping industry, North has continued to provide its Members with high levels of service whilst ensuring it remains a financially solid Club that is well positioned to meet future challenges,’ said Shirke. He says North’s ‘excellent set of results’ for the financial year to 20 February 2016, which saw free reserves increase by US$90 million to US$428 million, means the Club is well-placed to provide the best possible support to members in an uncertain trading environment.

In particular he said ‘North will continue to support the International Group’s initiatives, devoting significant management resources to the important work of the various sub-committees and working groups. We will also monitor developments following the UK’s recent decision to leave the European Union, managing the risks and engaging with regulators where necessary.’

Shirke says North is fully supportive of resuming lawful trades with Iran. ‘We supported the International Group’s initiatives to purchase fallback insurance to cover the risk of reinsurance recovery shortfalls arising from the inability of US primary reinsurers to contribute towards Iranian claims, as well as agreeing to the mutualisation of shortfalls in excess of the cover provided by the fallback insurance.’ North’s joint managing director Paul Jennings is closely involved in this work as chairman of the International Group’s reinsurance subcommittee.

‘We also fully support the International Group’s efforts to provide shipowners with a practical solution to their insurance and certification requirements under the Maritime Labour Convention amendments which take effect on 18 January 2017. Although these credit risk liabilities do not naturally fall within the range of third party liabilities traditionally covered by P&I clubs, we have agreed to absorb, but not pool such liabilities and efforts are now underway with those states which have ratified the convention to agree the form of certification required as evidence of cover.’

Commenting on ‘Brexit’, the UK’s recent majority vote to leave the European Union, Shirke says, ‘North is monitoring the situation in order to manage the risks and opportunities that arise and will engage with regulators when and where necessary. The Club will ensure that appropriate contingency measures are put in place to deal with the regulatory and legal consequences of the referendum outcome.’

In conclusion he says, ‘Doing things the “North way” is at the heart of what we do and we will continue to focus our attention on ensuring that our Members receive the service they deserve. Examples include providing industry leading in-house legal solutions, advice on ship’s technical and operational issues and encouraging early intervention in disputes – an initiative I am keen to promote. Overall, I truly believe that North provides the benchmark for service in the industry.’