Western Europeâ€™s biggest oil and gas producer will probably see investments slump by one-fifth next year compared with 2014, when crude hit a peak, as the industry adjusts to considerably lower prices.

Investments by oil and gas companies operating in Norway will fall to 171 billion kroner ($20 billion) next year, 5.6 percent under a previous estimate, according to a quarterly survey by Statistics Norway. The estimate for this year was little changed at 192.8 billion kroner, but far below the 214.3 billion kroner spent in 2014.

Norwayâ€™s oil companies reduced their exploration-spending forecast for next year by 35 percent from the previous quarterâ€™s estimate, and foresee a â€œsharp declineâ€ in the number of offshore wells, Statistics Norway said.

The development threatens to throw Norwayâ€™s economy into a recession. Crude producers and service companies such as state-controlled Statoil ASA have announced more than 25,000 job cuts, sending ripples through an economy where one in nine jobs depends on oil.

â€œI donâ€™t know how large the additional negative impulse will be in our estimates for 2016, â€” we will come back to that in mid-December,â€ Norges Bank Governor Oeystein Olsen said Tuesday in an interview in Aalesund. â€œI wouldnâ€™t say that I was surprised but we will take the new figures into consideration.â€

Norwayâ€™s central bank has cut its policy rate in the last year to a record low of 0.75 percent and signaled the possibility of more easing ahead. The bankâ€™s latest forecast shows petroleum investments will fall 12.5 percent this year and 10 percent next year.

â€œIt is clear that the prospects for the Norwegian economy will be weak next year and for some time,â€ Marius Gonsholt Hov, an economist at Svenska Handelsbanken AB, said by phone. While the survey wonâ€™t affect Norges Bankâ€™s decision in December, it is possible that oil investments may impact the central bankâ€™s forecasts â€œfurther out on the curve from end of 2016 and 2017.â€

Statoil, Norwayâ€™s largest oil producer, will probably drill fewer exploration wells offshore Norway in 2016 than this year, it said Monday. Bente Nyland, the head of the Norwegian Petroleum Directorate, said in an interview the total number of wells drilled in Norway will decrease next year.

â€œThere are some pluses also: we have a more expansionary fiscal policy, compared to our estimates in September; we have a weaker krone, which provides positive impulses to parts of the economy other than oil,â€ Olsen said. 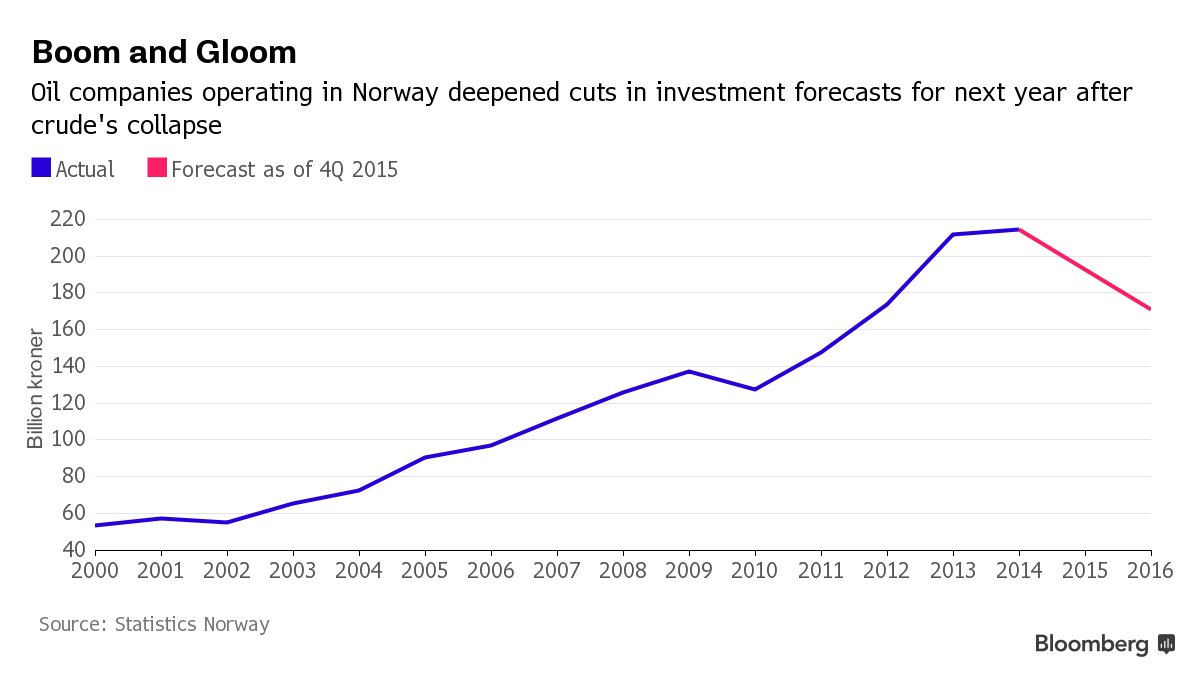