Oil and gas companies operating in Norway, western Europe’s biggest producer, cut investment forecasts further for this year and next as they continue to weather a two-year long collapse in crude prices.

The decrease for 2016 was mainly due to lower estimates for field developments, while lower expected investments in shutdowns and removals and exploration led to a decrease for 2017, the statistics agency said.

“A decrease from the second quarter to the third quarter in the year before the investment year is very unusual,” Statistics Norway said in a statement. It also happened last year for the first time since 1999, it said.

Oil companies are delaying development projects and exploration drilling in Norway and elsewhere to withstand a decline in crude prices. About 40,000 jobs have been cut in Norway’s offshore industry, while the central bank lowered rates to a record. Survey unemployment rose to 4.8 percent in June, the highest since at least 2004, according to separate statement today. The downturn has forced the government to make its first withdrawals from its $890 billion sovereign wealth fund this year as it spends more of the nation’s oil wealth amid dwindling income from petroleum production. 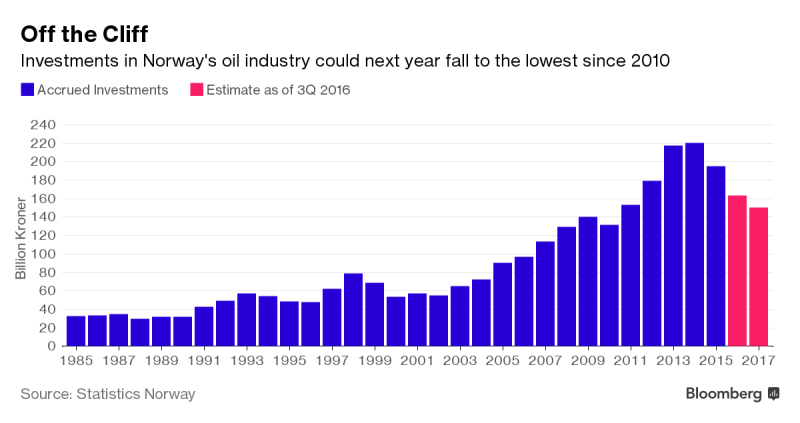