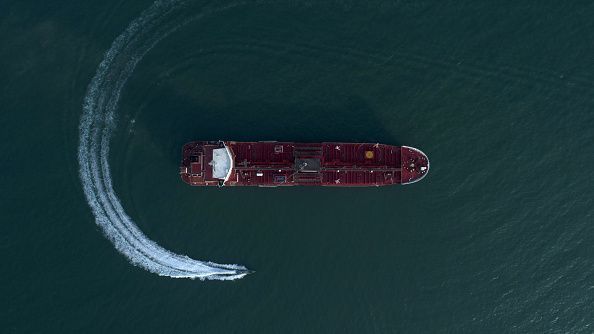 Confronting the first crisis of his premiership, Boris Johnson must decide what to do about the Stena Impero, the British oil tanker being held by the Islamic Republic of Iran. The regime in Tehran has named its price: the release of the Grace 1, an Iranian ship carrying oil to Syria that was seized by the Royal Navy off Gibraltar.

Johnson must know that such a trade would set a dangerous precedent. The Iranian supertanker was stopped because it was contravening European Union sanctions against the genocidal dictatorship of Bashar al-Assad. The British vessel was, in essence, taken hostage—as the swap offer demonstrates. This is an extension of the regime’s longstanding history of diplomatic blackmail. If it so chooses, Iran can mount a legal challenge to the seizure of the Grace 1. But the trumped-up charges against the Stena Impero—Iran has furnished no evidence of an accident with a trawler—suggests that its fate, and that of its 23-member crew, is at the whim of Iran’s leadership.

A resolute response to this kind of hostage-taking would deprive it of its power and reveal ship seizures as a dead-end strategy, one likely to precipitate the kind of kinetic consequences that Iran has so far sought to avoid. But were Johnson to agree a swap, he would encourage the Islamic Revolutionary Guard Corps to grab more vessels in the Strait of Hormuz. British tankers have steamed away from the Persian Gulf since the ship’s capture, but will hope to return before too long. In the meantime, the IRGC might target British nationals on other ships in the area.

Another issue is at stake. Iran is not merely asking for a ship-for-ship exchange. Remember that the Stena Impero was captured after Britain had already made the most reasonable offer possible for the Grace 1: the supertanker could go free if Tehran guaranteed that it would not deliver its cargo to Syria.

In essence, the Islamic Republic is demanding the freedom to keep supplying oil to Assad in exchange for the British vessel. That affront comes on top of its long-standing military, intelligence and financial assistance to the dictator, which has contributed to the slaughter of more than 500,000 Syrians and the displacement of millions more.

Johnson has little influence on events in Syria beyond the presence of a small contingent of British soldiers. Britain can’t stop the IRGC or its Lebanese and Iraqi proxies from massacring more Syrians in order to keep Assad in power. But it can hurt the Butcher of Damascus by blocking the supply of Iranian oil, as the current fuel shortages in Syria show. This is the least Johnson can do.

During Johnson’s campaign for the premiership, he didn’t want to give the appearance that Britain is going along with President Trump’s “maximum pressure” against Iran. For instance, he said Britain would not support the U.S. in a war against the Islamic Republic. Tehran initially portrayed the seizure of the Grace 1 as a sign that the Atlantic allies were in cahoots.

But by taking the British vessel, Iran has given Johnson an opening for a conversation that need not include reference to American aims.

What can he expect from the Iranians? Not reasonableness, as Johnson knows from personal experience. On a 2017 trip to Tehran as Foreign Secretary, he asked the regime to release British citizens being held hostage. (Earlier in the year, he had made matters worse for one of them, Nazanin Zaghari-Ratcliffe, by saying—incorrectly, he would later admit—that she had been in Iran to teach journalism.)

The visit to Tehran came while the 2015 nuclear deal, known as the Joint Comprehensive Plan of Action, was still functioning. President Trump was threatening to torch the agreement, and Iran was counting on Britain and the other European signatories to dissuade him. In other words, the regime had plenty of reason to show some goodwill by releasing Zaghari-Ratcliffe at Johnson’s request. Instead, they ignored it. Zaghari-Ratcliffe remains a hostage; indeed, the regime’s treatment of her has grown even more cruel since the Grace 1 incident.

Johnson can be glad for the small mercy that the Stena Impero’s crew did not include any British citizens: they hail from India, the Philippines, Latvia and Russia. There is no concern that they will suffer Zaghari-Ratcliffe’s fate. The ship’s owners say the men are safe. Since Iran has no direct animus against their home countries, they will likely be allowed to go home soon. (The Grace 1’s crew is from India, Pakistan and Ukraine; four of them were briefly held by Gibraltar police, but have been released.)

This allows the prime minister to say, entirely in good conscience, that Britain will not pay the price Iran has set for the Stena Impero.