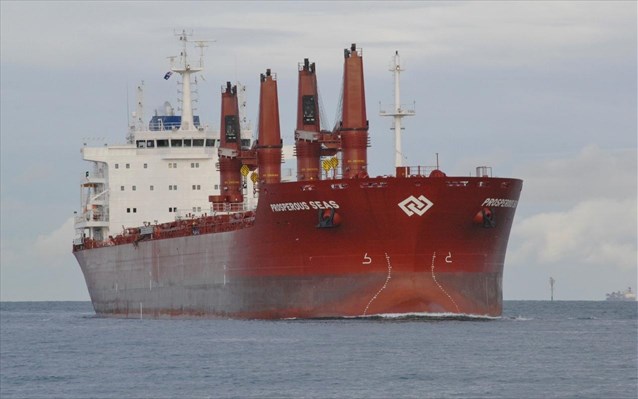 Paragon Shipping announced that it had reached an agreement with its creditors to liquidate its remaining fleet in order to settle one of its debt obligations.

The fleet, consisting of the handysize and panamax bulkers Coral Seas, Golden Seas, Prosperous Seas, Precious Seas, Priceless Seas and Proud Seas, is to be sold to unnamed, unaffiliated third parties, Paragon said. In exchange, it will receive “full and final settlement of the outstanding amount of the respective facility,” referring to a syndicated loan facility dated May 6, 2014.

Paragon did not specify the dollar value of the sale nor the amount of the debt to be retired.

The Company is currently in discussions with Jiangsu Yangzijiang Shipbuilding Co., or Yangzijiang, to extend the deliveries of its three Kamsarmax newbuilding drybulk carriers (Hull numbers YZJ1144, YZJ1145 and YZJ1142), towards the end of 2016, subject to certain conditions, at no extra cost to the Company. The balance due to Yangzijiang for the delivery of the three Kamsarmax newbuildings is currently higher than the estimated market value of these vessels.

In relation to the issued and outstanding Unsecured Notes, the Company did not proceed with the interest payment of $0.5 million, which was originally due on February 16, 2016, due to lack of liquidity. Pursuant to the Unsecured Notes indenture, the Company is under the 30-day grace period to make such payment that will expire on March 17, 2016. The Company is still lacking the liquidity to make the $0.5 million interest payment upon the expiration of the said grace period.

The Company has already announced an offer, as further amended and extended, to exchange all properly delivered and accepted Unsecured Notes for shares of Paragon’s common stock by 5:00 p.m. (New York City time) on March 18, 2016 (the “Extended Expiration Date”). Settlement for all of the Unsecured Notes validly delivered and not withdrawn on or before the Extended Expiration Date, will be on March 23, 2016. Each holder of an Unsecured Note (each a “Holder” and collectively the “Holders”) who validly delivers and does not withdraw all Unsecured Notes held by such Holder, shall receive four (4) shares of Paragon’s common stock for each Unsecured Note, which shall include any accrued and unpaid interest thereon (the “Exchange Offer”). As part of the Exchange Offer, Holders will also be required to consent to the removal of certain covenants and sections of the Paragon Notes’ Indenture dated August 8, 2014.

The Company is currently evaluating a number of strategic alternatives.

[…] There you will find 75259 more Infos: shippingherald.com/paragon-shipping-sells-off-entire-fleet/ […]

[…] There you will find 64378 more Infos: shippingherald.com/paragon-shipping-sells-off-entire-fleet/ […]

[…] Informations on that Topic: shippingherald.com/paragon-shipping-sells-off-entire-fleet/ […]

[…] There you will find 66057 more Infos: shippingherald.com/paragon-shipping-sells-off-entire-fleet/ […]

[…] There you will find 78614 more Infos: shippingherald.com/paragon-shipping-sells-off-entire-fleet/ […]