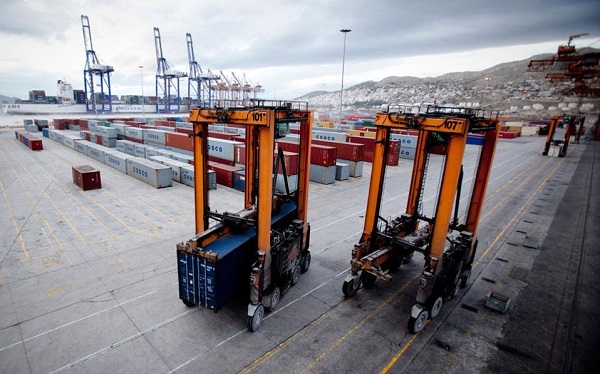 The new era ushered in for the Port of Piraeus is being felt at the global level, chiefly due to the presence of the COSCO Shipping Group at the Greek port and the new Piraeus Port Authority (OLP SA) management.

In recent years, significant investment has been made, while other projects are on course for implementation, aiming at the upgrading and modernization of the country’s largest and busiest port.
In the framework of its strategy to upgrade the port, OLP SA has set a key priority to protect the environment and effectively manage the effect of climate change. As a result, the provision of improved services goes hand in hand with the port’s energy and environmental performance, in line with the highest global standards (i.e. ISO certification for all the port’s activities, etc.).

The Port of Piraeus has consistently achieved a high ranking among port operators globally in recent years. Speaking at the Delphi Economic Forum, Mr. Yu Zenggang, Executive Chairman of Piraeus Port Authority S.A, says: “The many distinctions and awards on environmental issues and sustainability as well as the company’s spectacular annual results are evidence of our proper strategic planning and successful implementation”.

The Organization holds ECO PORT status, certification provided by the leading European environmental network, having a proven track record in implementing a series of initiatives and actions to limit CO2 emissions via the use of alternative energy sources, while at the same time adopting effective waste management practices, reducing sound pollution and sustaining the ports’ water quality, among other things.

Mr. Yu Zenggang also pointed out at Delphi that the Port of Piraeus’s achievements carry a collective importance, through its great returns to the Greek economy, but most importantly to the people and the prosperity of the surrounding communities.

Mr. Nektarios Demenopoulos, Deputy Manager PR, IR & Company Announcements Dpt. at OLP SA, notes that the port of Piraeus “actively participates in promoting clean energy initiatives”, adding that it has also put together a dedicated energy management team, aiming at reducing emissions from the operation of the port, across about 5 million square meters and 43 kilometers of coastline.