Refiners, traders brace for fuel-market volatility ahead of sulfur caps 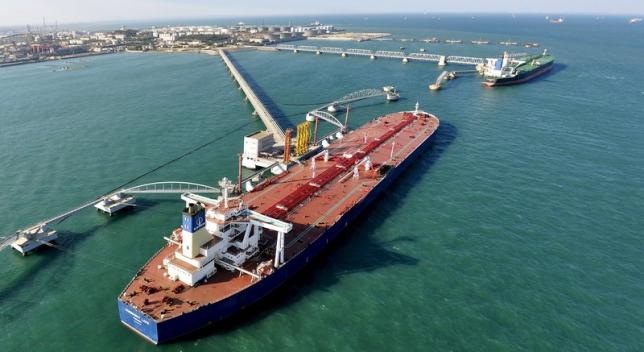 Global executives and traders are bracing for higher volatility in fuel markets as they expect refiners to process more light crude oil in the lead-up to new rules aimed at slashing the use of dirty high-sulfur fuel oil in global shipping.

Beginning in 2020, shipping vessels will not be allowed to burn fuel with a sulfur content higher than 0.5 percent, down from 3.5 percent currently. The International Maritime Organization (IMO) plan is among the most significant changes in decades for global shipping and refining.

“I think there will be a lot of volatility and uncertainty around this,” Jeremy Weir, chief executive officer of global commodity trading firm Trafigura said at the CERAWeek conference in Houston.

Once the rules take effect, the shipping industry will need to switch to either marine gasoil, low sulfur residual fuel oil or a blend of high sulfur and ultra low sulfur fuel. This could boost margins for companies operating complex refineries with large coking capacity.

Increased demand for light, sweet crude could widen its premium over heavier, sour crudes with a higher sulfur content. That wider price gap could boost the advantage some U.S. refiners have gained by configuring their plants to further process heavy, sour crude over the past 20 years, as it cheapens the cost of heavy crude feedstock.

Heavy crude “will need to be heavily discounted” to Gulf refiners that use those grades, said Robert Campbell, head of oil products research at Energy Aspects.

Earlier this year, the value of light sweet crude on the Gulf Coast was about $4 over medium sour crude. This week, the premium is near $3 a barrel, but that could widen again.

Refiners are not expected to make costly structural changes, such as adding new cokers, to their facilities, Herman said, because price volatility will not last long enough to make such an investment viable.

“It’s not going to last long enough for people to go out and spend lots of money on cokers and resid hydrotreaters,” he said.

“We don’t need to make investments to meet demand,” said Tufan Erginbilgic, chief executive of downstream at BP, adding that there is “absolutely enough” product to meet demand.

Executives do anticipate more ups and downs in the fuel oil market, a less active market than crude trading.

Forward bunker fuel, or high sulfur residual fuel oil(HSFO) refining margins for 2020 have collapsed in recent months. About 2 million barrels per day of HSFO demand will be lost in 2020 if rule enforcement is strict, Bank of America said in a recent research note.

“You’re already seeing in the forward curve for fuel oil a severe discount as this gets implemented,” said Trafigura’s Weir.

Compliance remains a concern; industry estimates of how much of the world fleet will try to keep using high sulfur fuel range from less than 10 percent to as much as 40 percent. Executives in Houston said they expected high compliance.

Scrubbers, which reduce sulfur content of fuel on-board ships, are seen as an alternative to buying more expensive, cleaner fuel. Weir said Trafigura has invested in 36 tankers with scrubbers.