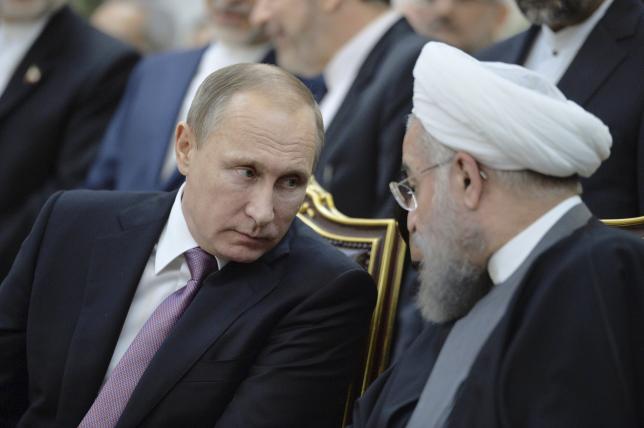 When sanctions on Iran were lifted in January, Russia might have expected to be near the front of the queue for business opportunities. Moscow, after all, was one of Tehran’s oldest allies and is now its partner on the battlefield in Syria.

On the evidence of the commerce passing through the Caspian Sea port of Astrakhan, the main jumping-off point for Russian sea-borne trade with Iran, it’s not playing out like that.

The value of goods shipped from the Astrakhan region to Iran in the first four months of this year was down 16 percent on the same period last year, according to the regional government.

“There’s a pause with grain, timber products are being loaded, metal gets shipped very rarely and then only in very small consignments,” said Artyom Ulyanov, commercial director of Astrakhan’s central cargo port. “Overall, we’re loading less that we did in previous periods.”

That, according to traders and shipping industry sources, is partly because Russian red tape is choking trade at a time when Iranians can do deals with Western countries that were effectively closed off to them before because of sanctions.

To be sure, the port at Astrakhan is only a snapshot of the state of Russian-Iranian ties. But it could point to the limitations of a relationship that is forged from a convergence of interests in areas like Syria rather than a shared world view.

The mood around the wharfs and dockyards at Astrakhan, Russia’s biggest Caspian Sea port, is sour.

On a visit late last month, a Reuters correspondent found that cranes in several sections of the port were standing still because there was no cargo to move.

“Before, we had to search for ships” to carry cargo to Iran because the volume of the trade was so high, said the owner of a grain-exporting company that supplies Iran, speaking of trade before the international sanctions were lifted.

Now, said the businessman, who asked not to be identified so he could speak candidly, ship operators came knocking on his door looking for business.

It was called off, with the local government citing “circumstances that have arisen”. Some participants only found out the event was off when they were already on the way there.

“We and another thousand people from Iran got tickets and visas, but they called off the forum two days before it starts,” said Taban Tizgush, president of the chamber of trade and industry in the Iranian province of Gilan, on the Caspian Sea.

“That causes us a lot of damage.”

How Iran and Russia get along with each other matters globally.

The joint operation between Russia’s air force, Iran’s military and the Iranian-allied Hezbollah militia turned the tide of the Syrian civil war in favour of President Bashar al Assad’s administration, frustrating Western efforts to push him out and testing U.S. influence in the Middle East.

What happens next in Syria depends in large degree on whether the Russian-Iranian partnership holds together and keeps backing Assad.

The port at Astrakhan gives one perspective on ties between the countries. Elsewhere, deals are being done.

Russia’s government said last year it had agreed joint projects with Iran worth $40 billion. A Russian shipbuilder won a contract in May worth nearly $1 billion to build five offshore drilling rigs for Iran. Moscow is also selling sophisticated weapons to Tehran, including S-300 air defence missiles.

But the mood at the port chimes with a more general atmosphere of tension in ties between Iran and Russia.

Some Iranian officials are wary of getting too close to Russia, which occupied Iran twice in the 20th century. Russia for its part is wary of Iran becoming too powerful and of alienating Iran’s rivals in the Middle East.

Interactions between the Kremlin and Iranian officials can, at times, be fraught.

That sparked an argument between Iranian security and Kremlin press service officials, and in the scrum that resulted, Russian Foreign Minister Sergei Lavrov and Novak, the energy minister, were jostled, according to a Reuters reporter who was there.

In an interview with Reuters, Alexander Zhilkin, the Astrakhan region governor, said grain exports this year would be lower than in 2015 because Iran was enforcing temporary grain import restrictions.

But he said he expected trade to double within 18 months of all the international sanctions being lifted on Iran.

“Petrochemicals, paper, glass, wood, wood products; there is demand for all of that,” he said. “This year, unexpectedly, we’ve had requests from Iran for potatoes and onions.”

However, local business people say the deeper problem is not demand.

Traders who move goods through Astrakhan to Iran talk of layers of red tape that can hold up cargoes for months, of corrupt officials withholding permissions, and of import and export regulations changing without warning.

“That’s why our share of trade with Iran is pitifully small,” said Alexander Rybakov, finance director of RusIranExpo, an exporters’ union.

Despite those issues, during the years of sanctions trade was healthy. That was in part because Russian companies were prepared to take the risk of doing transactions with Iran, while many other countries were not.

The main exports via Astrakhan – wheat, timber and scrap metal – were not banned by sanctions. But the international restrictions imposed over Tehran’s disputed nuclear programme effectively barred Iran from international financial systems, so settling bills was complicated.

Russian firms found ways around that, by using intermediary banks in third countries. Grain exports from Russia to Iran grew while sanctions were in force.

But with sanctions gone, business people in Astrakhan predict that big global grain traders will now move into the Iran market, squeezing out Russian players.

The big global traders will have lower costs because they can deliver grain on vessels of up to 70,000 tonnes via Iran’s Gulf ports, while the maximum size of vessels in the Caspian is 6,000 tonnes, said Hossein Lotfi, owner of a trading firm.

“If Russia does not take steps to hold onto its trade with Iran, it could lose 20 to 30 percent of grain exports,” said Lotfi, who is also a consultant to Astrakhan’s chamber of commerce with Iran.

“Once payments are simplified new players could come into the south of Iran, and they can offer lower prices.”