Seaborne Trade: Checking Up On The Trends

Following a decline in 2009, seaborne trade grew on average by 4.9% p.a. in 2010-13, reflecting booming import demand in a number of key importing countries and faster than global GDP growth. However, recent shifts in demand trends contributed to slower seaborne trade growth in 2014 (3.2%) and 2015 (2.0%). How has this reflected changes in demand for bulk shipments into major importing countries?

The ratio between global seaborne trade growth and GDP growth (the ‘multiplier’), when considered over a long time period, can be a useful indicator of the impact of drivers in shipping. Following the economic downturn, the ratio averaged 1.3 in 2010-13, partly as strong Chinese GDP growth drove a surge in raw material imports, and globally production was outsourced to regions more distant from demand centres. Since 2014, the ratio has fallen below 1. The drop was most marked in 2015, with the ratio reaching 0.6, as world seaborne trade is estimated to have grown 2.0% and GDP by 3.1%, partly reflecting shifts in import demand. Growth in bulk imports (dry bulk and oil) to the five biggest importing nations in 2015 (see graph) slowed from an average of 5.5% p.a. in 2012-13, to 1.6% p.a. in 2014-15, with cargo totalling 3.7bt, equivalent to 49% of global bulk trade.

Of course, China, the world’s largest importer of bulk cargoes, had been key in supporting the multiplier. The country’s bulk imports, which account for 23% of world seaborne bulk trade, grew on average by 11% p.a. 2010-13. However, the maturing Chinese economy’s shift, diversifying away from heavy industry, led to a stark slowdown in growth in bulk imports. Shipments to China rose 3% in 2014 and remained fairly flat y-o-y in 2015. Seaborne coal imports to the country fell 30% y-o-y to 188mt in 2015, while growth in iron ore imports slowed to 3%, from 15% in 2014. However, some of the loss was offset by robust crude import growth, partly supported by the oil price collapse.

While China is frequently highlighted as a of key driver of slower global trade growth, the expansion in imports into some other major nations was also more sluggish in 2014-15. Japan’s bulk imports, which account for 8% of the world total, grew on average by 3% p.a. in 2012-13, and fell 2% p.a. in 2014-15, to 588mt in 2015. Elsewhere, although expansion in Indian bulk imports has been firm, it is slowing. Growth slowed to 8% in 2015 due to a decline in coal imports.

In contrast, the rate of increase in Korean bulk imports picked up in 2014-15, largely underpinned by firmer growth in dry bulk shipments, although this was not enough to offset the slowdown in other countries. Elsewhere, the rate of decline in US imports eased, with most of the fall in oil imports having already taken place.

So, whilst the maturing Chinese economy has contributed to slower trade growth recently, it has not been the sole driver. Seaborne trade has still grown robustly since the start of 2009, by around 30%. But the world fleet is now 48% larger in GT terms. Surplus capacity today evident in many sectors is a clear reflection of concerted pressure from slower growth in shipments across key importers. 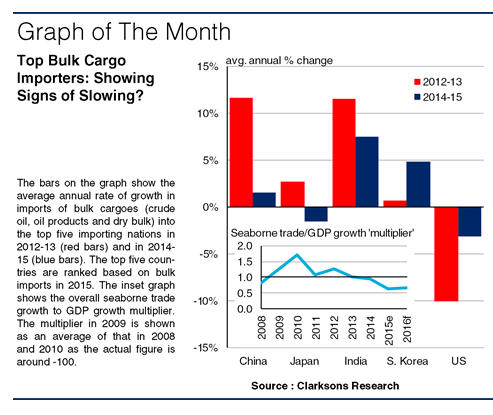