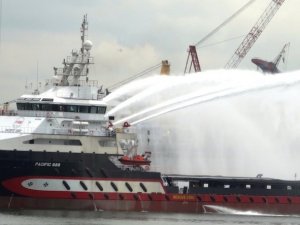 SEACOR announced that its SEA-Vista subsidiary has reached an agreement to sell one of its ECO-Class tankers for approximately $135 million.

In conjunction with the sale, SEA-Vista will lease the vessel from the purchaser and simultaneously bareboat the vessel to an oil major for the duration of the lease. The transaction is expected to close before year end.

Sale proceeds will be used to pay down SEA-Vista’s outstanding term loans and revolver, after which SEA-Vista will have approximately $130 million of debt outstanding. SEA-Vista’s debt is non-recourse to SEACOR and included in SEACOR’s consolidated financial statements.

Through the first half of 2018, approximately 88% of SEA-Vista’s available service days are contracted, and as of December 31, 2017, SEA-Vista will have a revenue backlog of $452 million consisting of a combination of time-charter and bareboat contract revenues that extend over 9 years.